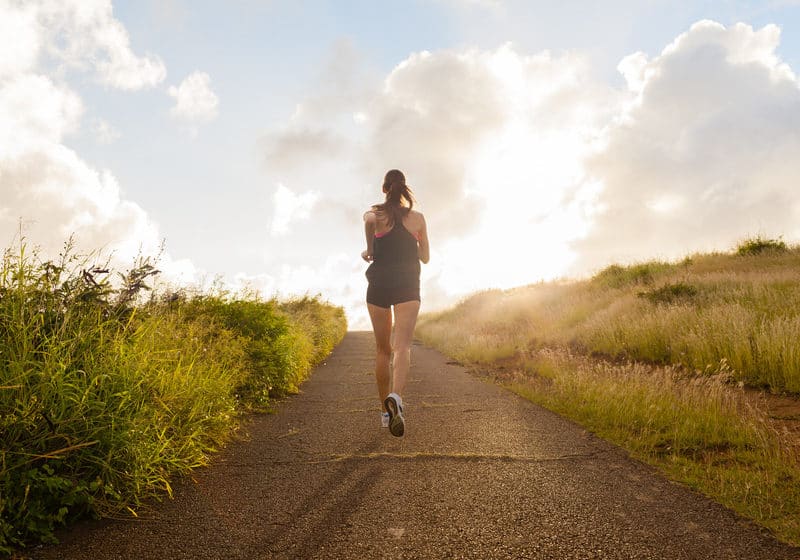 Most runners probably don’t put a lot of thought into the surface they are running on. For those who run simply for exercise or to get out to clear their head likely just go for a run on whatever surface is right out their front door. But running puts an incredible amount of force on the human body and certain surfaces seem like they would be more forgiving than others. Which made me wonder if people who run a lot of miles each week need to be careful about the surfaces where they are doing their running.

So, what are the best surfaces for running?

Here are 8 different types of surfaces you could run on. I’ll go over the pros and cons of each so that you can decide for yourself which is the best surface for running depending on how each may affect your body as well as the type of training you’ll be doing.

Many people assume that running over and over on particular surfaces, such as concrete, is bad for their joints. But is that really true? We’ll answer that in this article as well as share why you’d want to consider each of the types of running surfaces.

The least forgiving surface and the one that I run on the most. If you live in a neighborhood or a city, chances are you spend a lot of time running on concrete, too. It’s the stuff sidewalks are made of as well as many urban trails. Because it lasts a long time, is a hearty surface, and is easily used for cycling as well as running and walking, it’s a surface often readily available for running use.

Pros of Running on Concrete:

Cons of Running on Concrete:

Concrete is the hardest surface on this list. Some argue that running on it can put more stress on your joints, specifically your knees and ankles. This research, which set out to see if stiffer running surfaces should be cited as the reason for injuries, found there to be “no significant differences” from their softer counterparts.

Concrete most definitely has an increased impact force, but the evidence is inconclusive to say whether this actually causes more injury. If you’re injury-prone, you can certainly try other surfaces instead and see if that helps. If you haven’t noticed any issues, there’s no reason to stop running on harder surfaces.

All those road races you’ve run? That’s asphalt. If you’ve been running for a long time it’s probably a surface you know well. Where there are cars, there’s asphalt, so chances are you’ve had lots of opportunities to run on it, even if it just means crossing the street to get from one sidewalk to the next. I’ve also seen bike/running trails made out of asphalt and I even ran on a middle school track comprised of this surface material the other day. I prefer the feel of asphalt, but stick to concrete sidewalks and trails for safety reasons.

Pros of running on asphalt:

Cons of running on asphalt:

Did someone say speedwork? Though this wouldn’t want to be your go-to for you long run days (hello, boring) the track is an excellent surface to run on and offers other benefits, as well. Modern tracks are made of synthetic materials that are durable and provide good cushioning.

Pros of running on a track:

Cons of running on a track:

Just yesterday I found myself having to run through a grass field during my long run due to flooding under the bridge of our main trail. The grass wasn’t cut short enough and I couldn’t get off of it fast enough. I only run in grass when it’s the only option because I just don’t like the slow down that comes with it. But I’m sure for those runners who ran cross country in their youth it feels a bit like “home.”

Pros of running on grass:

Cons of running on grass:

My husband’s favorite. Unfortunately, the miles and miles of dirt trail that he loves isn’t super close to home, so he doesn’t run on it as much as he would like. But, he does have one that loops around his work that he uses to get in lunch runs each week. Though not always as easy to find as some other surfaces, there might be one closer than you think. Dirt/hard-packed trails can be a great surface to run on so it’s worth looking into!

Pros of running on a dirt trail:

Cons of running on a dirt trail:

As far as cons, they are few and far between! Though they can get muddy (Raise your hand if you’ve had a run planned on a dirt trail only to have to scrap it from a recent bout of rain). Going at peak times will ensure there are lots of other cyclists and runners out so you can stay safe.

There are many runners who much prefer these types of mountain trails over any other type of running surface. With the challenge it can bring while also being surrounded by breathtaking beauty, it’s not hard to see why.

Pros of running on a technical trail:

Cons of running on a technical trail:

If you’ve never gotten the chance to go for a run along the beach, I encourage you to do so next time you’re there. Though not my surface of choice, it definitely has its advantages. Just understand that running on packed wet sand is very different than loose dry sand, with the latter being much more difficult.

Pros of running on sand:

Cons of running on sand:

This running surface is probably the one that gets the most groans. Some people can’t stand the treadmill and avoid it like the plague. I personally don’t mind it! As far as running surfaces goes, it’s one of the easiest to run on.

Pros of running on a treadmill surface:

Cons of running on a treadmill surface:

Though you may have gone into reading this article assuming that concrete and asphalt were poor choices for a running surface due to the amount of stress they can put on the human body, the truth is that this hasn’t been solidified. We can use our common sense to assume this is the case, but I have to agree with painscience.com in that we can’t go around stating something as fact just because it seems logical. More research will have to be done to determine how much (if any) deterioration running on those harder surfaces can cause.

Overwhelmingly, however, experts agree that running on a variety of surfaces is best. Overuse on any one surface is much more likely to lead to injury. We all have preferred surface, but with 8 different running surfaces, there’s no reason you can’t mix it up. Not only will you be doing good for your body by increasing its range of adaptability, but you’ll also probably really enjoy the change of scenery.

In the end, listen to your body and use your best judgment for you. If one particular surface doesn’t feel right or seems to cause you pain, then it’s a good idea to run on a different surface, if only temporarily.

link to Get to Know the Tempo Run: How Fast and How Long Should They Be?

There are several key components to any runner's weekly training plan: a long run, easy runs, and quality runs. One kind of quality run that you may encounter is called a tempo run. But what is a...