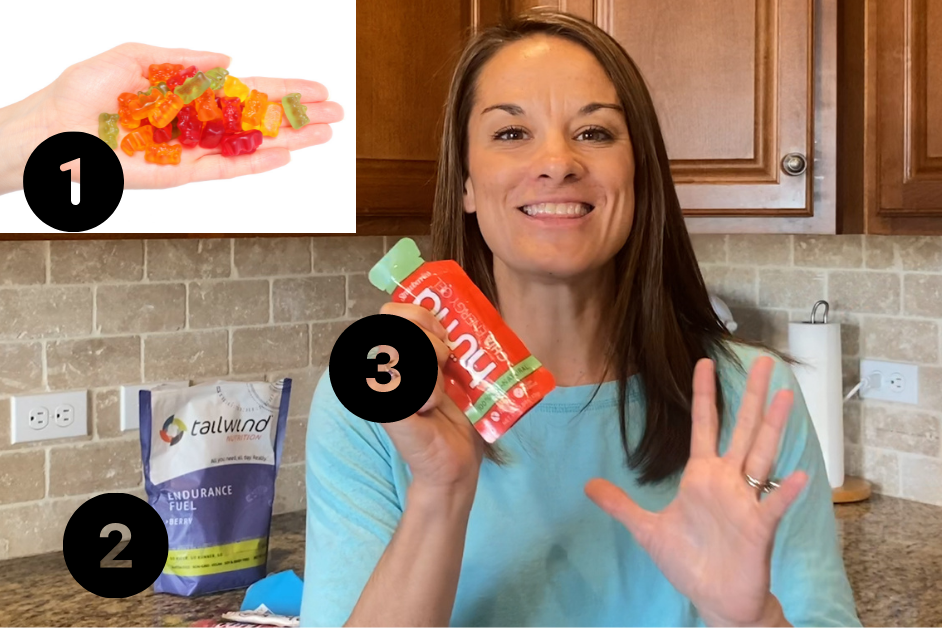 You’ve signed up for an upcoming half marathon and your training is moving along nicely. But do you have a plan for your nutrition during the race? That is, do you know what to eat during your race, when to eat it and how much?

Sports nutrition experts recommend that runners eat during a half marathon. During your race, you should eat something carb-rich that you’ve practiced with during your training runs. Plan to take in around 30 – 90 grams of carbs per hour in the form of gels, chews or whole foods during your half marathon so you can finish faster and stronger.

Navigating the world of running nutrition can be intimidating and overwhelming, with so many products and different advice. We’ve weeded through all the information to answer runners’ most common nutrition questions in regards to half marathon nutrition.

What should you eat during a half marathon?

Let’s begin with a fundamental truth for all runners: carbohydrates (carbs) are your friend. Most runners need to follow a diet that is high in carbs for the best training and racing
results.

Carbohydrates from food are stored in the body as muscle and liver glycogen. Glycogen is the body’s preferred energy source during moderate- to high-intensity exercise, such as running. According to Lizzie Kasparek, a registered sports dietitian at the Sanford Sports Science Institute, endurance athletes such as runners should aim to have between 55- 65% of their diet come from carbs.

Taking in carbs during your half marathon is vital to a successful race. But how can a runner know what form of carbs might be best to fuel their runs? The best in-run fuel source is one you “prefer, tolerate, have access to, and can afford” according to runner, 3x Boston Marathon qualifier, and registered sports dietitian Jen Scott. Running fuel is not one-size-fits- all, and Scott gives examples of options such as:

For fast digestion and quick absorption in the body, Meghann Featherstun, registered sports dietitian and 2:57 marathoner who owns Featherstone Nutrition, recommends that runners eat engineered sports gels containing ingredients such as fructose, glucose, or maltodextrin. Another great option for runners is fuel from real food – such as bananas, applesauce pouches, or Huma (chia) gels – which the body absorbs more slowly than engineered gels
or chews, but is still very effective on the run. Featherstun recommends that runners try out
different fueling options to find what works best for them.

How many carbs should you eat during a half marathon?

Deciding exactly how many carbs you need to take in during a half marathon for your unique body is the tricky part. A 110-pound woman doesn’t need the same amount as a 200-pound man for example. And someone finishing a half marathon in 1.5 hours won’t need as much as someone running for 2.5 hours.

During a half marathon race, or any effort over 80 minutes long, runners need to take in between 30-90 grams of carbohydrates per hour, according to Meghann Featherstun, a registered sports dietitian and 2:57 marathoner who owns Featherstone Nutrition. That’s a wide range so here are couple rules of thumb to guide you:

And no matter what, practice the amount you take in and you’ll find the combination that works best for you before race day! Each body functions uniquely so your nutrition needs won’t be the exact same as someone else’s.

Our Favorite Half Marathon Fueling Options

At Ready.Set.Marathon, we have our own personal running fuel preferences that we’ve found after lots of trial and error. These options are a good place to start if you’re not sure what you’d like to try. Keep in mind that what may work for us may not work for you, and that’s okay! There are many, MANY more options out there beyond the ones listed below.

Some of our favorites are:

Using the guidance above for fueling here are few examples of the amount a runner may take in during a half marathon to have a great race:

Many runners also like to use nutrition options that have caffeine in them, either before or during their race. Read “Caffeine Before Running and How it Affects Performance” to find out if supplementing with caffeine is right for you.

Timing: When to fuel during your half marathon?

After eating a gel, it can take up to 15 minutes to absorb and be processed by the body. It’s important to fuel before you start feeling tired or hungry in your race, to avoid depleting your glycogen stores. Not fueling on time can lead to an unpleasant, potentially race-ruining experience runners refer to as “bonking” during a race.

The general advice from running coaches and sports dietitians is to fuel early and often during your race.

Many runners, like Coach Jane, also like to take a gel (or whatever their preferred in-race nutrition is) within 5-10 minutes before the race start for an added burst of carbs as the race begins.

Do you NEED nutrition during a half marathon?

You don’t need to take in nutrition during a half marathon to just to get through it. But if you want to have a good performance and race well, you’re going to need to take in carbs.

A friend of mine recently shared that her husband didn’t take any food or water during his half marathon a few years ago. However, she told me that he really struggled in the final miles of his race. If you want to be able to run your best during a half marathon, then you definitelyshould take in fuel during your race, according to Run4PRs, an organization made up of running coaches and registered sport dietitians. The body’s glycogen (aka energy) stores begin depleting approximately 90 minutes into a run, which probably explains why my friend’s under-
fueled husband struggled toward the end of his race.

On her podcast, sports dietitian Meghann Featherstun advocates that consuming more carbs during a race can help lead to faster running. Take the current marathon world record holder, Eliud Kipchoge, for example. When he ran his world record-breaking, 2:01:39 race at the Berlin Marathon in 2018, Kipchoge consumed over 100 grams of carbohydrates per hour! That is the equivalent to four slices of whole wheat bread, or four medium baked sweet
potatoes, for each hour of his race.

Now, I’m not saying that you need to consume nearly as many carbs as Kipchoge did during your own race, or that eating a lot of carbs will result in record-breaking races…but a correlation between faster racing and higher carb intake definitely exists across all levels of running.

Sports gels and chews should be taken with water. Almost all gels and chews have directions on their packaging stating that they need to be consumed with water. The water helps dilute it and allows your body to absorb it more easily.

You should never drink high-carb sports drinks, such as Gatorade or Tailwind, at the same time you take your gel or chews. Why? According to dietitian Jennifer Scott, sports drinks and gels taken together make a sugary mixture that is too concentrated in the stomach, leading to poor absorption, stomach pain and even gastrointestinal distress. Scott recommends spacing out your sports drinks from when you take your gels.

Hydration, like fueling, is an important component of your race. In order to stay hydrated while you’re working hard, your body needs more than that tiny bit of water you’re sipping with your gels! It is recommended that runners drink 5-10 ounces every 15-20 minutes on all runs lasting over 45 minutes. Ready.Set.Marathon’s own Coach Jane recommends that runners grab water at almost every water station during a race in order to stay hydrated and to avoid stomach upset from taking in too much water at once. You can also carry you own water using flasks, a hydration belt or vest – read this post to learn about some good options.

What if taking gels/chews/food during runs upsets my stomach?

Many runners worry about having digestive issues (such as cramping, bloating, and stomach upset) crop up mid-run, especially during goal races. Runners should avoid fueling with foods that contain lots of protein, fat and/or fiber, because those kinds of foods can contribute to unwanted digestive problems. Furthermore, not everyone can tolerate the same foods on runs, so it’s important to test different options while
you’re running and see what works for you.

If you’re new to eating during your runs, start with very small amounts and gradually build up to the recommended amounts of carbs per hour from there. This will help train your stomach to tolerate fuel taken on the run. During your training runs, make sure to practice with the exact same fuel, and the same timing of taking your fuel, that you plan to use during your half marathon race.

By following these tips, you will toe the line of your half marathon ready to perform your best, with less chances for stomach problems during your race!

Not sure what pace to plan for with your half marathon? Read “The Running Time Trial: Purpose, How and Interpreting Results” to find out how you determine your best race pacing.

link to The Running Time Trial: Purpose, How, and Interpreting Results

When you begin a new training cycle, it's common for a coach to ask you to complete a time trial. No matter what distance of race you're training for, these running time trials give both you and your...