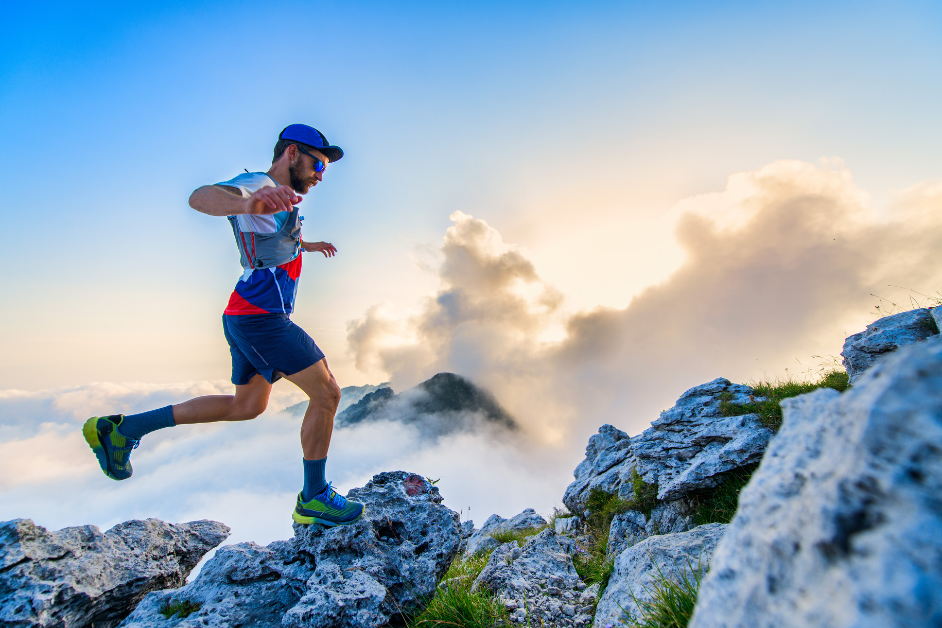 Plenty of runners finish marathons and even 100-mile ultramarathons every year, so it’s no secret that we as humans are capable of moving our bodies a pretty long distance if we go about it the right way. Even though most “normal” people I talk to think it’s crazy enough just to try and run 26.2 miles or more without stopping, humans can actually run much, MUCH farther than that and I bet it’s far beyond what you’d guess.

Dean Karnazes holds the record for the longest distance ever run by a human without stopping. In 2005, he ran 350 miles (563 kilometers) across Northern California in a time of 80 hours and 44 minutes. This is equivalent to running over 13 marathons in a row.

Over three straight days of running sounds impossible for the average human so this guy must have some kind of super powers, right? Well he certainly has something the rest of us don’t…but whether that’s sheer willpower or something else, you’ll have to read on to find out.

In 2018, 1.1 million runners toed the line at marathons to complete the feat of running 26.2 miles. In that same year, over 600,000 people took part in ultramarathons ranging in distances from 30 to 100 miles. Enough people to know it can be done, but still only a tiny percentage of the world’s population which makes running those distances huge achievements in and of themselves.

But humans are actually capable of running even more than that without stopping (while still coming out of it doing a-ok). Here are a few of the most notable that demonstrate just how far that really is.

Dean Karnazes, record-holder of the longest continuous run ever, is certainly not your average joe. Besides running 350 miles straight from San Francisco to Palo Alto, he has plenty of other athletic accomplishments that most of us could only ever dream of such as running cross country from Disneyland to New York City in 75 days and running a marathon in each of the 50 states for 50 consecutive days. Or…perhaps we just don’t want to do it and could if we tried hard enough? It’s clear he has what it takes both physically and mentally, which you’ll understand better if you read his book Ultra-Marathon Man.

But Karnazes isn’t the only one who can run far.

Though Karnazes has run the furthest straight distance ever recorded, it’s a woman who holds the record for the longest amount of time running without stopping. In 2013 at the age of 47, New Zealander Kim Allan ran around the same park 332 times which took her 86 hours and 11 minutes. This is the equivalent to 3.5 days and she did it all without a single wink of sleep in that timeframe. Pretty amazing.

Longest Distance Runners in the World

And of course I have to mention the Tarahumara, a Middle American Indian tribe residing in the remote, mountainous Copper Canyon of Northern Mexico who are known for their long-distance running ability.

Running is ingrained in the tribe’s culture and gives way to a perfect example of what people are capable of in terms of running when it’s weaved into daily life as opposed to a way to stay active like most of the rest of us do. Though there isn’t one individual in the group who holds a specific record for longest distance run (that we know of), there certainly isn’t another group of people in the world who can collectively run the distance they can. According to research from Lehigh University, it is not uncommon for Tarahumara individiuals to run between 50-80 miles per day to complete everyday tasks.

It may be easy for us to think these people must be superhuman or have some special biological characteristics the rest of us don’t have, when in actuality, several scientists debunk this myth and instead cite, “hard work, physically active lifestyles, determination, and the spiritual and social values they place on endurance running” as the reason they are known as the best endurance runners in the world.

If you want to know more, I highly recommend you read Christopher McDougall’s book that explores the life and running abilities of this tribe, Born to Run.

The capabilities of humans and how far they can run surpasses what we would imagine they could do. But if a human can run 350 miles without stopping, who’s to say someone else won’t come along and run 351 miles, 400 miles or more?!

Though the runners who have performed these feats have gone several nights without sleep to do so, the human body eventually needs to sleep to properly function…and that definitely gets in the way of a human being able to run forever. However, Alex Hutchinson, science journalist from Outside magazine suggests in this video that if going slow enough, “humans can run forever.”

If a human can stabilize the following trifecta for the duration of a run, there really is no telling how far they could go without needing to stop:

Hutchinson goes on to refer to this as the Power-Duration Relationship which can essentially predict how far each person could run without stopping based on the three factors above. Some people, such as the fastest marathon runners in the world, could essentially run forever if they jogged slow enough. This is because when the intensity is kept low enough, they are able to keep fatigue from setting in at all.

Though it’s essentially possible for humans to run forever when taking these factors into consideration, the need for sleep, as well as our mind willing us to stop long before our body would need to (it’s a powerful thing you know), it’s just not something that’s going to reasonably happen. But clearly, Karnazes, Allan and the Tarahumara are the closest we’ve come so far in modern day society.

Are humans built for long-distance running?

It’s starting to sound like humans were built for this sort of thing all along, right?

They found that humans’ ability to run long distances stems from an adaptation that originated around two million years ago. Essentially, as homo sapiens (our species) we developed body characteristics that allowed us to run long distances and for an extended period of time. Back then this evolved adaptation was necessary for survival in order to obtain food.

Some of the adaptations include:

Obviously this isn’t necessary today; we are just able to reap the benefits of our ancestors’ adaptations when we decide we want to spend weeks of our lives training for endurance running events. Because it’s fun, right?!

Can humans run farther than any animal?

Even with our minds giving up before our bodies do, humans are still capable of running farther than other animals.

According to the New York Times, when it comes to distance, humans can outrun almost any animal. We’re certainly not the fastest, but we are the one “animal” that’s body is designed for endurance running.

Even though we have the disadvantage of only have two legs compared to the much faster four-legged mammals such as cheetahs and horses, it’s our ability to stay cool from sweating that gives us a major advantage over long distances. Eventually, the other animals will get too hot and need to stop, and we’d be able to keep right on going.