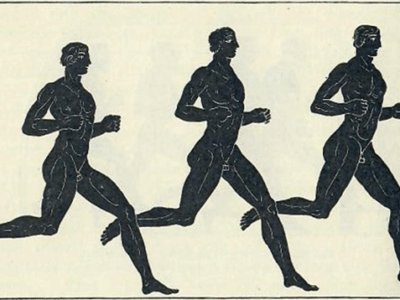 Why is a marathon 26.2 miles long? The marathon dates back to several hundred years BC. The story goes that a Greek messenger named Pheidippedes ran 25 miles from Marathon to Athens to deliver a battle victory message, announcing that Greece had defeated Persia. The modern marathon of 26.2 miles started at the London Olympics in 1908.

The first recounted marathon was not an organized running event like you see today. In fact, the fascinating story is likely embellished. As sometimes happens with multiple retellings of a story over time, the history of the marathon is largely based on myth. But when the Olympic Games took over the event just before the turn of the 20th Century, the foundation was built for the popular, “pie in the sky” event that it is today.

In 490 B.C., Pheidippides was a courier, or day-long runner, in the Greek military. Bounding on foot over terrain most of us would balk at, he owned his sacred role of messenger for the country of Greece.

Many today might express that running is their life, and for Pheidippides, it truly was. When the Persian Army settled into Marathon and was on the verge of conquering Athens, it was Pheidippides they turned to for a very important task. Considered the best runner of their fleet, he was chosen by the Athenian Generals to run to Sparta to seek help from the Spartans. Knowing they were outnumbered, they needed more men. So, over the course of 36 hours, he ran the 140 miles without sleep to plead for their aid. Upon receiving the answer, he turned around to deliver the devastating news to his leader that they would be on their own.

Now you might be thinking, but that’s a lot more than 25 miles…so where does the Marathon part come in?

The battle ensued and Pheiddipides was there to witness the end. Though a sea of dead from both sides spread over the coastal city of Marathon, Athens seized victory. Pheidippides retraced his route back home – 25 miles away, having been charged to deliver the good news, The tale is that Pheidippides, having exhausted himself to the point of no return, collapsed upon his arrival. He died immediately following his announcement of the successful mission.

It all sounds pretty amazing, right? We all love an inspiring story where someone’s capabilities seem no less than superhuman. Unfortunately, the account of the story is said to be altered quite a bit. Either way, his abilities captured the attention of many and he became a hero. Eventually, the legend evolved into an Olympic sport.

The Marathon at the Olympic Games Becomes 26.2 Miles

Stories like that of Pheidippides allow us to see the abilities humans can possess when faced with adversity. Even if it isn’t an entirely accurate historical event, we still realize that people are far more capable than we often give them credit for. Pierre de Coubertin was someone in particular who was inspired by the accomplishment of Pheidippides. The story of the Greek runner who ran with purpose on that fateful day so long ago had his attention.

Coubertin was also enamored with the ancient Olympic Games and founded the first modern Olympic Games. Though there was not a marathon event in the original games, Coubertin felt strongly about including the long-distance running race.

The idea was well received. The marathon became an official event during the first modern Olympic Games in Athens, Greece in 1896. The race course began in the town of Marathon. Runners would cross Greece, finishing their race at the Panathenaic Olympic Stadium, 40 kilometers away. If you’re a math whiz, you’ll know that doesn’t equal 26.2 miles, but instead is just under 25 miles. Still an amazing feat of endurance, and a distance that few of the 16 runners that day had ever run before. With a time of 2:58:50, Spiridon Louis made a name for himself that day by taking first in the marathon and gaining a victory for his country of Greece.

Beginning that day, the marathon became a fixture in the Olympic Games.

In those first few Olympic Games, the race deviated slightly from a perfect 40-kilometer race. The course was predetermined and wasn’t always exactly the same. It wasn’t until the 1908 Olympic Games in London that the race became the distance we know it as today. But like those races before it, the distance didn’t have any special significance. Other than the fact that it was the exact distance between two decided on starting and ending points, it was essentially arbitrary. But it was a distance of 26 miles, 385 yards (26.22 miles) to be exact. The distance wouldn’t be confirmed as the official race distance until the 1924 Paris Olympics.

At the turn of the century, marathons started to be organized outside the Olympics as well. Starting with the Boston Marathon in 1897, citizens would have the opportunity to run this new distance that wasn’t for the faint of heart.

The first Olympic marathon proved to be a success, so it was no surprise when the Boston Athletic Association wanted in on the action. On April 18, 1897, Patriot’s Day, 15 men lined up to run the first-ever annual marathon. In order to complement the first Olympic Games in 1896 as well as Greek legend, the first Boston Marathon was only 24.8 miles. The distance changed to 26.2 miles following the 1924 Paris Olympic Games to align with the new standard. And it has been that way ever since.

For many years, only men were allowed to run this endurance race. Women had been excluded since the very first Olympic Games. With the marathon race coming a long way from its inception and becoming a firm 26.2 miles, women were still not allowed to officially compete until 1971. There was no women’s marathon event in the Olympics until 1984. For years women had already proved that they, too, could run the grueling distance. Many tried to argue that the distance wasn’t suitable or healthy for women, so they set out to prove them wrong.

Both men and women of all abilities now have the opportunity to run a marathon. A 26.2-mile race that has evolved over time, continues to gain popularity. With over 775 marathons scheduled for this year in North America alone, just about anyone has the opportunity to go the distance. Just long enough to practically break you, but achievable nonetheless.

26.2 seem like an insurmountable feat? It isn’t, but many like to start with the half marathon, at, you guessed it…13.1 miles. Already mastered the marathon and want to recreate a distance similar to Pheidippides run to Sparta? Ultra-marathons of various distances have shown there’s no reason to cap races at 26.2 miles.

Frequently Asked Questions About the Marathon

How long is a marathon? Most often run as a road race, certified marathon courses are always 26.2 miles long. The marathon distance fluctuated in the beginning, but 26.2 miles became the standard distance in 1924 and hasn’t changed since.

Who holds the record for the fastest marathon? Kenya’s Eliud Kipchoge currently holds the men’s marathon record time of 2:00:25. For women, Great Britain’s Paula Radcliffe holds the title with a time of 2:15:25.