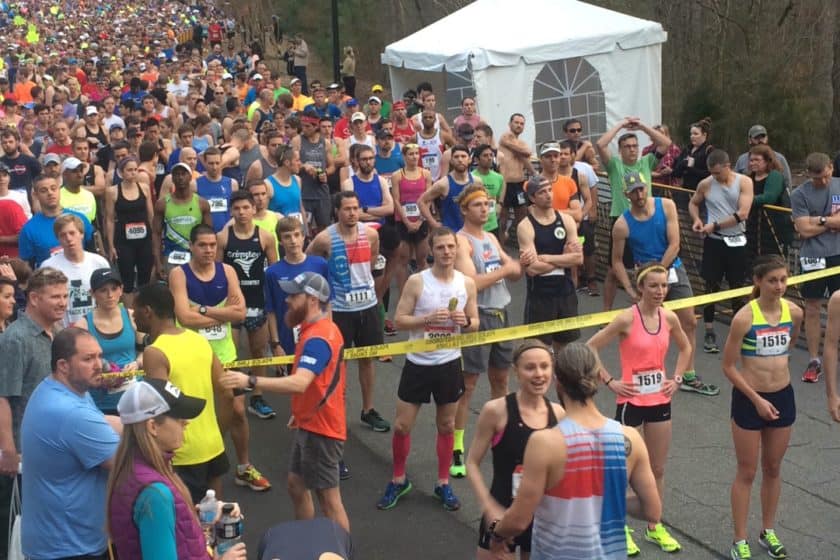 For many races, you saunter up to the crowd hovering in front of the start line and pause to decide where you want to jump in. You might size up the competition a little bit…”he looks really fast, probably should stay behind him…” and “they’re hanging towards the back so maybe they’re walking…” and then you weave your way to the middle and wait for the race to begin. Chances are you’ll pass quite a few people all while getting passed yourself. And you just deal with it. Larger races, however, often use what’s called a “corral” start. Ultimately it’s to benefit the runners and keep the start line running smoothly. But some wonder how it works exactly and how to ensure you’re in the right corral.

So, what is a corral start? A corral start, sometimes also referred to as a wave start, is a way for larger races to reduce congestion at the start of a race. Runners are placed in groups with other runners of similar pace for that particular type of race. The goal is that faster runners won’t have to weave around those running at a slower pace.

How well corrals are organized is dependent upon your chosen race. The most important part of corral starts is to properly determine where you belong. We’ll help you understand how these are organized and how to choose the proper corral (or why the race put you into a particular corral).

All races pretty much fall into one of three categories when it comes to how the start of the race is organized. The first category I’ll refer to as a “free for all,” the second is where corrals or waves are identified by some sort of sign, and the third is where a race gives you an exact wave to start in. Here’s what to expect from each race:

The Free for All

This will most likely be the way any small, local race is organized. I’ve run many a 5k that is organized in this manner. When you show up to one of these races, you will see a crowd gathering in front of the start line. There is no way you can know what anyone else’s pace is going to be so you kind of just have to take a guess about where you might best fit in. Fastest at the front, the middle of the pack, and walkers in the back. Most likely you’ll be somewhere in between all of that.

Yes, this can be annoying, because the start often slows you down. Personally, I like to use this forced slow start to my advantage by starting the race at a conservative pace. If you let it bother you, you’re just going to use up precious physical and mental energy. I highly recommend not spending too much effort weaving around people. It will break up soon enough for you to fly.

When races have this kind of start, they are trusting you to jump in the proper place. “Where is that?” you might be wondering. Well, volunteers either hold signs or there are large fixed signs – on these you will see a pace written. It might say something like 8:30 – 9:00. If you’ve been training to finish that particuar race with an 8:45 pace, then that’s where you jump in. You don’t need to be right next to the sign, you just need to be somewhere in that general area. This leaves room for faster runners in front and slower runners behind. Not sure what pace you’ll run? We’ll talk more about how to determine that. 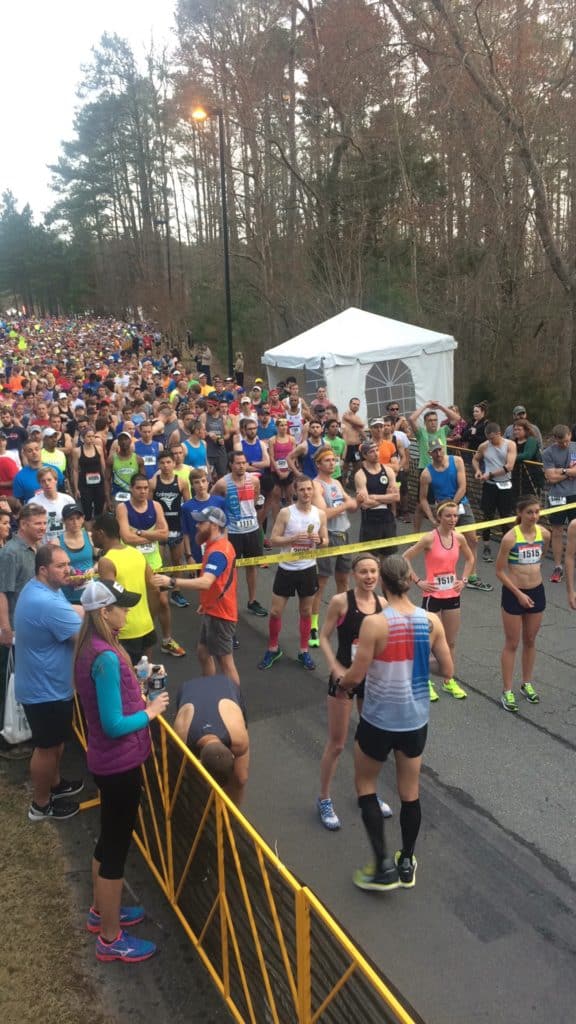 The Corral (or Wave) Start

Races that have a high number of participants will likely use a corral start system where your placement is predetermined when you register. Whether it’s a 5k or a marathon, if there will be a lot of people running the race, it’s likely your bib number will have a wave listed on it. My first experience with this was when I ran my first Bolder Boulder many, many years ago. Their corrals start at A and go through the alphabet. With a field of over 50,000 runners, there are even waves like BB, FA, etc. Some races might have as few as 3 waves listed as Wave 1, Wave 2, Wave 3. Or in the case of the Boston Marathon, they are designated by the color of your bib. 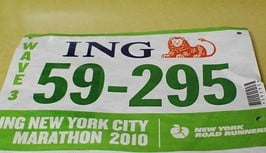 The choice for a large race to utilize a pre issued corral system is a major benefit to its runners.

What Races Use Corral Starts

Large races have been using corral (also called wave) starts for quite awhile. You may have a favorite race that’s never used a corral start and then you show up the next year and suddenly they have one. This is likely due to the fact that the race is growing, or that they just want better organization of the start, in general.

In 2006, the BAA implemented a corral start. This was when there were only 20,000 participants and then went with a 2-wave start of 10,000 runners in each wave. That still seems like a lot, right?! Now it’s broken down into 4 (what they refer to as waves) and then broken down more with 9 corrals in each wave. It ends up being 36 different corrals, and with 16 different start times. Each corral crosses the start line 5 minutes after the preceding corral.

With races this large, you don’t have to worry about when you cross the starting line. Your time doesn’t start until your chip (either on your shoe or attached to your bib) is activated at the starting line. This is called your “net time” which is your official time. Ultimately, starting in a group of runners with a similar pace as you is a big benefit.

Why Are Corral Starts Beneficial

Based on the elements of the “Free for All” option, you’re probably starting to understand why a corral start works much better. If there is just one blow of a horn and everyone is off and running, it’s going to be quite a large pack of runners squeezing through the start line. Often friends and family want to start together even if they aren’t at the same paces, which makes the crowd all over the map in terms of how fast they’re going to run. This makes for a congested start as well as on any tight turns along the way.

The runners are at the forefront when a decision is made to introduce a corral start. You can see that it was improved for the Boston Marathon as the race grew in numbers. The BAA cited, “more space and greater comfort for athletes prior to the race,” and “Once crossing the starting line, runners will be able to run free sooner,” as two of the main reasons why they began using a corral start. Safety is another reason why staggering the start of a race is important. It would pretty much be unheard of for a race this large nowadays to not have a preassigned corral for each runner.

Whether your corral is designated for you or you have to choose in a more informal wave start, it’s imperative that you start in the correct spot. You’re really impeding other runners by not adhering to the rules or being honest about your capabilities.

When races don’t have corrals, you can start wherever you’d like. But there still should be some rhyme or reason behind where you join the racing crowd. I can’t tell you how many times I’ve started in the mid-front just to end up having someone walk right in front of me from the get-go who makes me almost stop in my tracks. It can be quite frustrating when you’re ready to roll – especially if it’s a short race.

There is absolutely nothing wrong with walking a race, but walkers should understand that they need to start towards the back. Honestly, I’ve had to adjust my expectations and realize that a lot of these smaller races are for “fun” and some people who are non-runners don’t even have this on their radar.

But with corral starts, it’s really important that you pay attention to how the race is organized and start in the appropriate wave. Here are some do’s and don’t when it comes to the two types of corral start races: 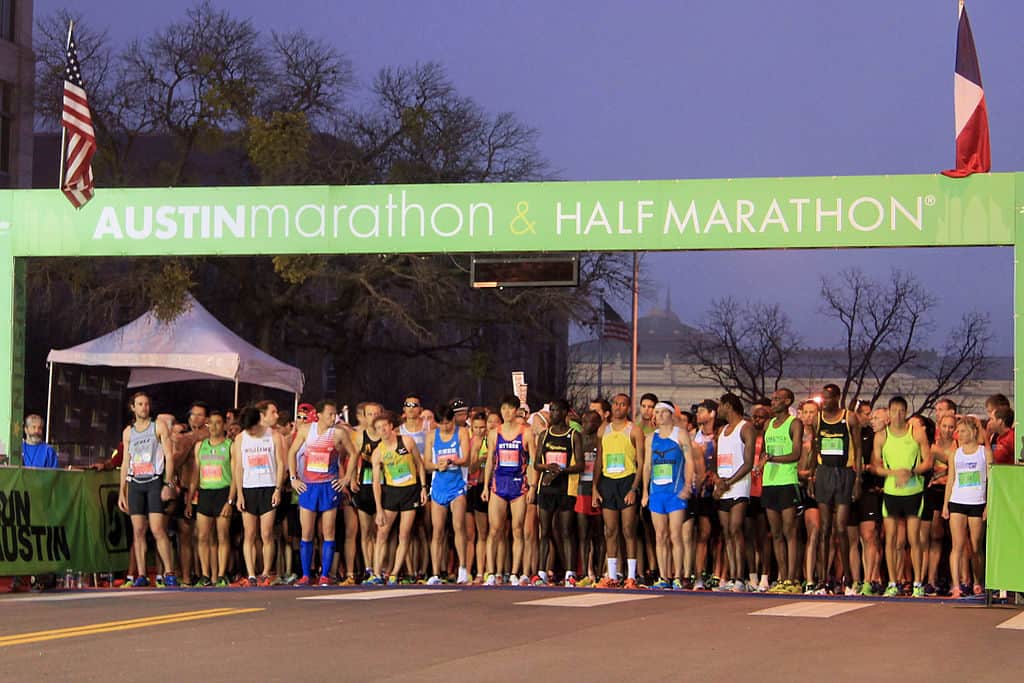 For these races, you either have to register with an expected finish time or they already know it from a previous race that you’ve run. To qualify for the Boston Marathon, for example, you have to have an official time from a Boston Qualifying race to register. You’ll be placed based off this time, even if you decide later that you have trained to run the race faster. Even races that you don’t have to “qualify” for still may use a previous race time to put you in a proper wave. But, if that’s not the case, you need to be as honest as you can be.