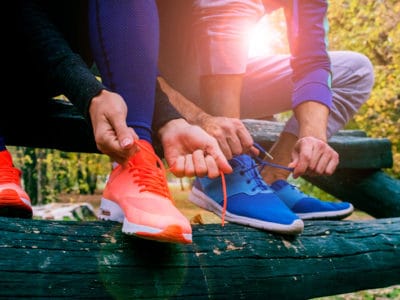 If you’re like me, when you peruse the running shoe aisle and pick up a pair that catches your eye, you immediately take in the weight of it. If it feels at all heavy, I for one, immediately put it back down. I don’t give that pair a second thought. Why, after all, would I want to make my running any harder by wearing a heavy pair of running shoes?! There does seem to be a range of weight in running shoes, but how wide is it? After noticing that not all running shoes are created equal when it comes to how much they weigh, I wondered how much they generally weigh and which weight is best.

There are varying opinions when it comes to how much cushioning a running shoe should have.

If you’ve ever read Born to Run by Christopher McDougall (and if you haven’t, you should) you’ll find one extreme. He provides evidence that the human species benefits from either running barefoot or with basically no cushioning. This you’ll find in a shoe like the Vibram Five Fingers. On the opposite end of the spectrum are shoes such as the Hoka  Gaviota. These are often described as “pillows for your feet.”

You’ll see from the table that running shoes really only vary in weight by 1-2 ounces per shoe. But that can make a difference when you’re trying to PR your 5k or running a marathon where you might be taking upwards of 50,000 steps. Although cushioning sounds like something you want between your feet and the ground, it’s what adds more weight to a running shoe. Though shoe companies have gotten pretty clever about figuring out ways to add cushioning and bounce to a shoe without adding extra weight.

An example of this is EVA cushioning which is used in a variety of your favorite running trainers. The midsole of the shoe is filled with tiny bubbles holding air that offer good cushioning and shock absorption without weighing down the shoe very much.

But in the end, a minimalistic shoe is going to weigh less due to the sheer fact that it’s made of less material.

Most running shoes nowadays can hardly be called “heavy.” We’re lucky to live in a time where technology is so great that none of us have to be running in boats even when we desire the maximum amount of cushioning. However, we’ll put the weight of running shoes in the three categories. None is better than the other when utilized for the proper purpose.

Light, average, and heavy running shoes can all serve a purpose:

A more heavily cushioned shoe like the Brooks Adrenaline or something more streamlined such as the Altra Escalante have a seemingly small, yet significant weight difference. As a runner, you need to determine your needs in order to choose the best option for your training. Lighter isn’t always necessarily better. Many runners will actually own both a set of lighter shoes and another pair of heavier shoes depending on the type of running they’re doing. Heavier is often great to train in as it provides more cushioning for all of those miles, springing for the lighter shoe on speedwork days and for races makes the most sense to keep it as light as possible.

It is argued that running shoes that weigh more can offer more protection from injury. So someone logging a lot of miles might find more comfort from a shoe that offers more cushioning.

According to Podiatry Today, the midsole of the shoe is where the cushioning is generally placed. A firmer midsole will make a shoe heavier, but can also help prevent the following ailments:

It needs to be noted, however, that not everyone shares this belief. In fact, some think that runners are too reliant on the pillowy softness which can impede proper running form. This article from Healthline states that shoes with maximum cushioning, “might actually increase leg stiffness and lead to greater impact loading when your foot hits the pavement.” But even they agree that the evidence is inconclusive.

Runners who have a larger overall body frame might find a heavier shoe to their advantage. Besides cushioning, extra weight on a running shoe can also come from the width. Larger body types often have larger feet and need a shoe that’s comfortable while also giving proper overall support.

The Mizuno Wave Sky is a popular shoe for larger runners. It offers great stability while effectively distributing weight across the footbed.

Another extra advantage to more firmly cushioned running shoes is that they last longer. The need to replace them less often is certainly appealing. Less replacing equals less dollar signs! And though carbon fiber plated shoes are alluring because they are light and incredibly responsive (think fast!), they also wear out much more quickly. Which is why most runners save shoes like the Nike Alphafly for race days.

You’ll also find that trail shoes are generally heavier because of the need for more cushioning on difficult terrain as well as lugs on the sole that give you the stability you require. You can read more about that in, “Best Shoes for Running on Ice and Snow.”

Many runners, myself included, automatically assume light equals better when it comes to a running shoe. Though not necessarily always beating out a heavier shoe, it does have quite a few advantages.

Step after step, a runner is going to notice even an ounce of difference between two different running shoes. Weight does matter. Though cushioning can offer great support to someone running high mileage, a runner may also feel more fatigued by wearing a weightier shoe. Though it might not be felt right away, lifting heavier shoes over the course of a long run can make a runner’s legs feel like dead weight.

Softer midsoles, which tend to be lighter can also improve shock absorption. This allows for fresher feeling legs.

Minimalist running shoes certainly aren’t anything new, but their popularity ebbs and flows. Though there are runners who do prefer a shoe with basically zero support and no cushioning, it’s uncommon to see. But the basis for this preference, and for wearers of the more mainstream minimalistic running shoes such as the zero drop Altras (my favorite) is that runners will run more naturally and efficiently by wearing them. With less of a chance for a heel strike, as well as a reduced impact loading rate, runners can often run their best stride while wearing lighter, less-cushioned shoes.

When runners want to be fast, they often turn to a lighter running shoe. The perfect combination for a runner is one who has an efficient running form wearing lighter, less cushioned shoes. The more connected feeling to the ground that these shoes offer can give the perfect amount of bounce a runner needs to snag best times.

You certainly don’t need to hear from me that running shoes are popular. A quick Google search will have your head spinning in no time. So I have a couple of recommendations for you:

Don’t get me wrong. Shoes do matter. And you may not have realized that 1-2 ounces in a running shoe could really make such a difference. But whether you’re training in a heavy shoe topping out at 11 ounces or you refuse to wear anything over 6 ounces, a lot more matters than just the weight of your running shoe.

READ NEXT: 7 of the Very Best Running Sock to Prevent Blisters

*As an Amazon Associate I earn from qualifying purchases. I earn a small commission from any purchases made from affiliate links and appreciate your support!