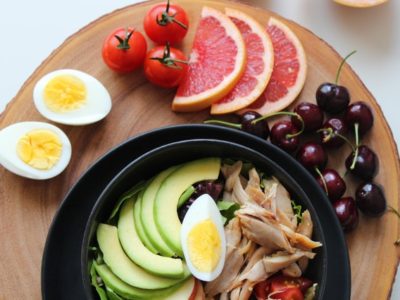 Unless you’ve been living under a rock, you’re probably at least familiar with Whole30. Maybe you first heard about it in a positive way from your friend in your marathon training group who swears by this clean way of eating, or in a negative way from your sister who was salivating over the pumpkin pie everyone else could eat that she couldn’t. Quite possibly, you’ve even tried it for yourself. Between books, social media and bloggers sharing tons of compliant recipes, there is certainly not a lack of information about the Whole 30 program. But since most people who complete Whole30s aren’t marathon runners, the information there is much harder to come by. As a marathon runner myself who has completed 5 rounds of Whole30s, I wanted to share insight into what marathon training might look like on a Whole30.

Should I train for a marathon on Whole30? Because the Whole30 is designed to be a month-long program, starting a Whole30 at the end of your training and then running a marathon is not recommended. Your body goes through a detoxification process during this time and will hinder your performance on race day. Though I personally don’t recommend starting a Whole30 during training at all, starting it at the very beginning is better than doing it at the end.

I am absolutely a proponent of committing one month of your life to try at least one Whole30, for many reasons. But telling your friend “I’m in” for an October 1st Whole30 start date when your marathon is less than a month away is most likely going to be a decision you’ll regret. Here I will explain what the Whole30 does to your body during those thirty days and how it will affect your performance as a marathon runner.

Before getting into the details about why most people will want to avoid doing the Whole30 program during their marathon training, let’s start with a little background about what it is.

In a nutshell, this is what you can eat during those 30 days: meat, eggs, vegetables, fruit, nuts, and seeds. The book outlines it all for you. And this is what you can’t: dairy, grains, alcohol, legumes (peanuts, beans, etc.) and anything with added sugar. For many, doing a Whole30 might mean erasing half your diet or more and replacing it with foods that are compliant. It’s an overhaul, to say the least.

During my 5 rounds, I saw many benefits, including better sleep, more energy, and clearer skin. There are also reasons that I have done 5 rounds and haven’t sustained this long-term. One, it’s not meant to be done forever and you can read more about that here. For me personally and as a runner, getting enough Calories was very difficult even though I could eat as much of the compliant foods as I wanted. And honestly, I want to eat cake on my kids’ birthdays and have beer and pizza on a Friday night.

On the other hand, completing Whole30s has taught me a lot about the foods that make me feel good and deciding what foods are worth it when I know it won’t help me feel my best. I stick to the guiding principles as a general rule, but I don’t put restrictions on myself either.

I often wonder if I completed a Whole30 prior to marathon training and just continued through how that might affect my performance. But I most certainly wouldn’t throw a Whole30 into my training mix, especially if I’m already more than a month in. Here’s why.

Week 1 Marathon Training on Whole30: I Can Barely Get Out of Bed for my Long Run

The Whole 30 Program does a really good job of preparing you for what you can expect throughout the days and weeks of the program. I’m going to utilize the basics of those to demonstrate the effect it will have on your marathon training week-to-week.

The first 2 days might seem like no big deal until…wham! Days 3 and 4 come at you hard. Remember that you are eliminating many things from your diet that your body is used to getting (creamer in your coffee, a treat every night after dinner, bagels before your long runs). It’s going to be a shock to your systems once those cravings aren’t satisfied. This leaves you with a hungover feeling accompanied by sluggishness and fatigue. In fact, sugar withdrawal can even trigger anxiety and moodiness.

I think we can agree that those feelings aren’t what you’re going to want during your marathon training. Marathon runners often run anywhere from 30-60 miles per week and if you can’t get close to the mileage you need during one of your crucial weeks, that’s not good. It would take a lot of grit to hit your miles, let alone your paces, during week 1 of Whole30.

Week 2 Marathon Training on Whole30: I Think My Legs are Made of Lead

That leads us into week 2, where the Whole30 peeps share that days 8 – 14 will include your toughest days as well as a bloated feeling you just can’t shake. Having done multiple Whole30s, this is spot on. And guess what? Your fatigue has not subsided yet, either. In fact, for some people it gets worse this week. The runners I know who have done Whole30s complained of not being able to stick to their old paces or even get their planned work out completed from just an overall feeling like crap.

Quitting a Whole30 crosses a lot of people’s minds in the 2nd week, and honestly, a lot of people do. They aren’t seeing positive results and the end still seems so far away. This is not the feeling you need while trying to accomplish your marathon goal. Marathon training is tough enough that throwing something else into the mix that will just add stress isn’t going to do you any favors on your marathon path. It’s just not necessary.

Week 3 Marathon Training on Whole30: My Running is Improving, but I’m So Hungry!

By Week 3, Whole30ers are finally starting to feel pretty normal. You’re halfway through and thinking you can hold on even though you still really miss so many foods (your dreams will even remind you!) The Whole30 calendar suggests you’ll be feeling something called “Tiger Blood” and I can attest, there really is a very obvious positive shift this week in energy and mood. Your running will probably start to get back to normal (though my husband didn’t experience this until week 4). So why wouldn’t you want to do a Whole30 while marathon training you might ask…if by this week you’re back to feeling good?

Let’s remember that we’re talking about training for a marathon with very high mileage weeks. You’ll need to be consuming a lot of Calories at this point – whether you’re in the thick of your training or in your taper period. I, and many others, struggle to get enough calories on Whole30 as it is that I can’t even imagine trying to run 25+ miles per week without getting nutrition from sources beyond what Whole30 allows. Even though you are allowed to eat as many of the compliant foods as you want, it’s very difficult to get enough carbs from what’s on the “included” list. If you did decide to try running a marathon on Whole30, potatoes would be your best friend. And you’d eat a lot of them.

Week 4 Marathon Training on Whole30: Will I Finish My Long Runs or Race?

Since this article is about running a marathon on a Whole30, let’s assume your race falls in this month somewhere. For the sake of explanation, I’ll go ahead and assume you’re running it in your last week. I mean, looking above, would you even want to try in any of the previous weeks? Very likely not.

Though you’re probably going to feel pretty darn great by week 4 (remember that I DID recommend Whole30 in general) you’re still not going to want to run a marathon (and you’ll probably struggle through your long run training runs).Here’s why.

Unless you’re a seasoned marathoner, you have no idea what to truly expect when you get out there on the race course. No matter how much you’ve prepared or stuck to your plan, those last 4-6 miles are probably uncharted territory. And this is where your nutrition matters maybe more than any other point in the race. All the nutrition you laid out in the foundation of the first 20 miles will either set you up for success…or contribute to a grueling end to your race. At this point, your body relies on glycogen stores to continue running efficiently (read more about that in my article “The Carbo Load: Why do marathon runners do this?” Your body will start burning fat if it has to, but if you aren’t used to exercising this way, you will suffer.

The last thing you want is a DNF in the marathon you’ve trained so hard for (or not finishing a training long run which is crucial to marathon success), so cleaning up your eating this drastically so close to race time is not recommended.

Exceptions to the Rule

I don’t want you leaving with the impression that runners should never do a Whole30. Or that you can’t properly train and do well with this way of eating.

On the contrary, I think it’s a great idea for endurance runners to at least do one Whole30. This program will give you great insight into the fuel that helps your body perform your best. Though I still personally think most runners would have a hard time consuming enough, and the right balance of, calories. But everyone is different! So if not right around the time of your marathon, then when?

Completing a Whole30 in the month or two BEFORE you begin your marathon training would be the perfect time.

The re-introduction of non-compliant foods would happen just before or during that first month (which is when you’ll be running lower mileage). Decide it’s going great for you and want to continue? There’s no reason why you can’t continue eating this way through your training and up until your marathon if it’s how you’ve been eating all along.