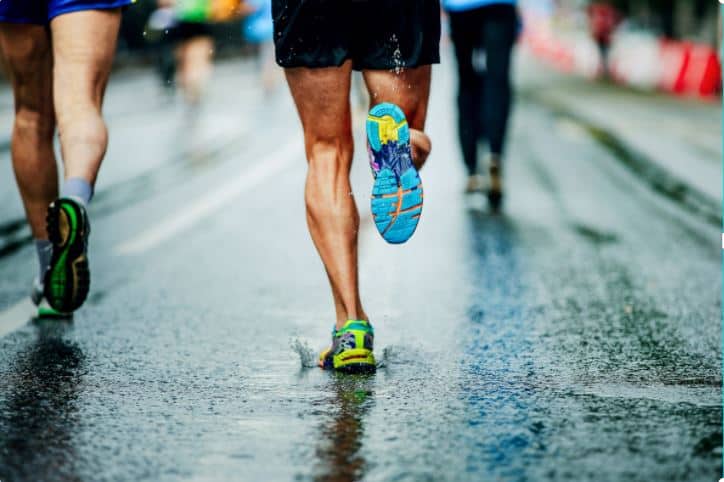 A marathon can be a daunting challenge, and for good reason. 26.2 miles is a long way for one, but training for one is also a major time commitment. It takes a lot of mileage to prepare to run a marathon (and even more to run it to maximum potential.)

When I ran my first marathon, I went into training as someone who routinely ran 3 days per week 3-4 miles at a time. So moving into 35+ mile weeks was a big adjustment! But I did it, and so can you. Sometimes just having it all broken down helps you see the forest through the trees, which is what I’ve done here.

How much do marathon runners run per day?

Runners in marathon training may run 0 miles on a rest day, 4-6 miles on an easy day, upwards of 20 miles on a long run day, and anything in between. So what if we took those weekly miles and averaged it out by day?

A typical runner training for a marathon mght build up to a 45-mile week. If that runner ran the same amount everyday, they’d be running a bit under 6.5 miles each day. Except, it doesn’t work like that. Even marathon runners need rest days, as I discuss here, and then they have to be sure to include a “long run” as well.

Not familiar with a long run? It’s exactly like it sounds – it’s a run that’s significantly longer than any other run you do that same week.

Could this runner choose to run 6 and in turn make a few of those runs a bit shorter? Definitely (6 days/week is what I do in marathon training). What about putting this mileage into 4 days? Yes, it could be done, but 5-6 would be ideal .

But just because this runner ran 45 miles in this particular week doesn’t mean she’s actually running 45 miles every single week.

With marathon training there is a build-up of mileage. This is required to keep your body from getting overuse injuries and to adapt to the newly added stress of mileage and perhaps also speed. Then as the marathon draws near, your mileage goes down again.

If you’re realizing that marathon runners put in a lot of work to prepare for their race, you’d be right! It’s all about prioritizing your week to fit it all in.

How much do marathon runners run per week?

It’s much more likely that you’ll hear runners discuss their weekly mileage as opposed to their daily mileage. This is because each week, at its core, looks similar. Most marathon runners run somewhere between 25 and 70 miles per week. (I know – it’s a very wide range!) Let’s dive into why such a big difference from runner to runner.

It’s important to understand that every runner is different, even the runners who are training for the same distance. Every person has different goals, different capabilities, and different limiting facts (work schedule, family commitments, age, etc.) This means that there isn’t a set amount of mileage that every runner needs to accomplish each week to run a marathon.

But there are definitely minimums as well as rules of thumb. Here they are:

1.) The 40-mile per weeker: To be able to run a marathon the entire way, a good weekly mileage to aim for would be 40 miles. This is the mileage you’d get to in your peak weeks, after you’ve safely built up to that number.

2.) The 60-mile per weeker: 60 miles per week is often a good sweet spot for a lot of people to avoid hitting the wall – it will get them reaching close to their full potential, but is also doable with the busy lifestyles that most people are up against.

4.) The 100-mile+ per weeker: And as for the elite runners, we’re talking the best in the world, 100-mile weeks are quite common. For example, Desi Linden was interviewed by Sports Illustrated and had this to say, “It’s slowly building into it. It depends on whether you’re coming off a big break. It could start with one week at 70 miles, another at 85 or 90 and then just working into those 100-mile weeks.”

Now we can’t all plan to run mileage like that and live our normal lives (let’s remember she does this full time as a professional!), but I love how she talks about the “slow build.” This is something every single marathon runner has to do if they want to take care of their body and continue to run marathons long term.

So, what if you just can’t get to a 40-mile week? Should you still run a marathon?

As a coach, I would personally have a hard time recommending that someone train with much less than 40 miles per week at peak (just because I REALLY want my runners to do their best), but if your goal is to finish or you don’t mind possibly walking, you can absolutely run a marathon averaging closer to 30 miles per week.

This article from Trail Runner writes that the general guideline of being able to finish a marathon strong is running “30 miles per week”, but I know I would be NOWHERE near what I’d like to do if that was my mileage.

But it doesn’t make it wrong at all. It’s important to remember that everyone’s goals are different. You need to determine yours before choosing a training plan or working with a coach.

How much do marathon runners run during a full training cycle?

To understand a bit more what I mean about a slow build-up, let’s look at how many miles a runner might run on average in different phases of a training cycle. Here’s what a “typical” full training cycle, or macrocycle, might look like with a goal of 45 miles per week.

Each phase plays an important role in your marathon training and you can read more about that in my article, “How Many Weeks to Train for a Marathon and Great Plans to Use.”

Keep in mind that this runner would go into this training cycle with a mileage base instead of starting from scratch.

So in this runner’s entire training cycle, they’ll likely run around 670 miles. This is of course an estimate for a runner in a training cycle like this, and many runners will run less or more.

Here is an idea of what a build-up + taper could look like (this was my month-by-month training for my 2019 marathon in Fort Collins):

Just because I’m curious, and you may be, too, this averages out to 5.83 miles per day for 17 weeks of my marathon training. (Excluding a couple weeks of base build up in May and a last week of taper in October.)

How many miles do marathon runners run in a year?

As we extend the amount of time over the course of the year, you’re likely wondering if marathon runners just keep running their normal mileage or if they ever get to take breaks?!

I’ll answer that last part real quick and say that yes, marathon runners absolutely take breaks between cycles where they back off on the mileage. Honestly, they need to if they want to keep their body healthy and stay injury free.

Most experts agree that 2 marathons per year is about what the typical marathon runner should be aiming for. Less of course is fine (I do one or two per year) and adding a third marathon in there would be fine for a lot of people as well.

But marathons put runners’ bodies through a lot and it’s important to take the downtime to rest, recover and avoid burnout.

When not in training, it’s good to keep up with “maintenance miles.”

Because there is a such a wide range of weekly mileage that marathon runners do, I can’t put even close to exact number of how many miles a marathon runner would run in a year, but let’s use our 45-mile per weeker as an example.

Someone who peaks at 45 miles might have a year that looks like this if they have 2 marathons planned:

This is equal to 1,680 miles in one year. And this runner could totally run less than an average of 20 miles per week in the off-season, but I think we all know that most runners have to get their fix!

And to be clear, someone’s average in the off-season could be MUCH lower or higher and still be on track for a great marathon.

Let’s Sum Up: How much should a marathon runner run?

That was a lot of info so let’s wrap this up with some key points on how much you might expect to run during marathon training:

If you’re wondering why I keep saying “or more!” the truth is that training for more weeks gives you enough time to build up to an amount of mileage that allows you to be prepared for a marathon. And more miles plus more 20+-mile runs (at least in the case of most runners), will only serve you in becoming a stronger and faster marathon runner.