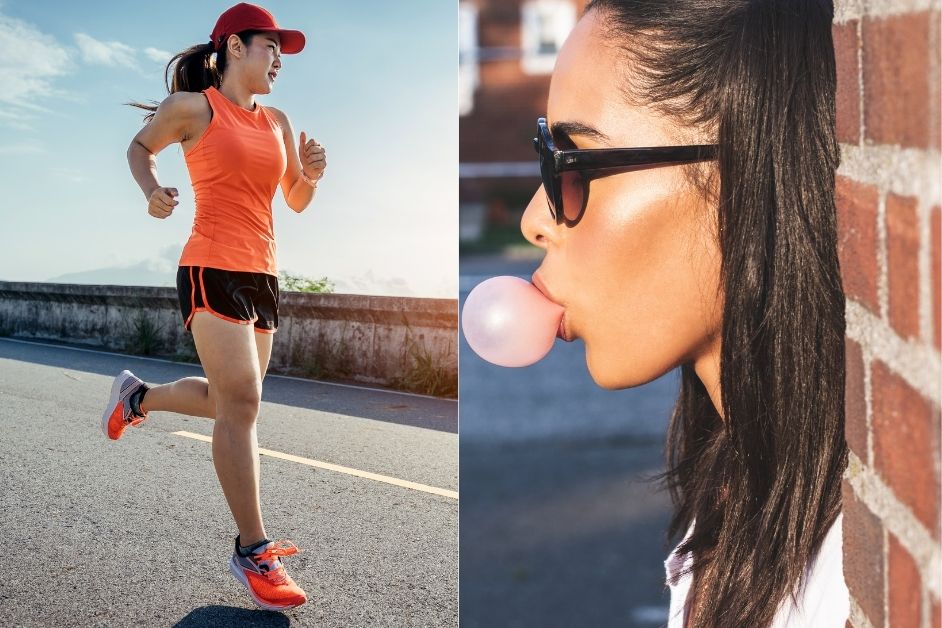 Have you ever considered chewing gum while you’re running? Seems strange maybe, but perhaps you’ve wondered whether it’s a good idea to try. To answer this question, we’ve delved into the science of chewing gum, and reviewed scientific studies about chewing gum and how it relates to athletic performance.

Based on our research, caffeine chewing gum, specifically, is good for runners, because it is scientifically proven to boost running performance by quickly delivering caffeine into the body. Regular chewing gum, however, does not have the same affect on athletic performance but may provide positive mental stimulation. For safety reasons, you may want to avoid chewing gum while running and can instead chew it before activity.

If you’re curious to learn more about chewing gum and how it can help improve your running, read on!

Should You Consider Chewing Gum While Running?

Whether or not to chew gum during your runs is really a matter of personal preference and if you’re willing to take on any possible safety risk. If you do decide to chew gum while running, gum that has caffeine will give you the most benefit.

The vast majority of chewing gum scientific research and study focuses on the effects of caffeine gum. Caffeine is repeatedly shown to improve physical and cognitive performance during exhaustive exercise. Whether studying soldiers, recreational runners, or sprinters, science proves again and again that chewing gum with caffeine improves athletic performance. Run Gum is one option that is specifically marketed to runners, but there are other options we’ve listed later on in this article.

CHECK OUT OUR ARTICLE ON CAFFEINE HERE: Caffeine Before Running and How it Affects Your Performance

There isn’t much scientific research to suggest that regular chewing gum makes a noticeable difference in performance, however. One recent study examined the effects of chewing gum while walking. It found that middle-aged and elderly male participants who chewed gum while walking increased their distance, speed, and energy expenditure, but aside from those subjects, chewing regular gum did not have much effect.

Regular chewing gum has been studied for its possible effects on cognitive performance, stress, and pain in daily life. Study results have conflicted with one another over the years, and do not reach a single conclusion. However, scientists still believe that the act of chewing something (whether it is gum, fingernails, or food) can most likely temporarily relieve stress and pain.

So if you are up for chewing gum while you run, you may find that it provides a bit of mental relief from the pain of the exercise you may be feeling (though don’t forget that 80% of your runs should be done at an easy (ahem, enjoyable) which we discuss more on the reason for that here.)

Benefits of Chewing Gum While (or Before) Running

Some reasons that runners choose to chew gum while running is because it:

For those who chew caffeinated sports gum before or during the run, the benefits are physical, cognitive, and psychological.

Caffeine gum has been shown to:

Caffeine gum can also help runners feel re-energized, especially on long runs or during races. Podcaster and former pro-runner Tina Muir has said that chewing caffeinated gum felt like she had a caffeine shot in the veins within a few minutes of taking it during a race!

Downsides of Chewing Gum While Running

There are risks to chewing gum during a run that are important to know. These include:

Additionally, you may find the possible issues annoying and/or uncomfortable:

The makers of RunGum, a caffeinated gum marketed to runners and other exercise enthusiasts, only recommend its gum be chewed before and/or after workouts. (Luckily, a 2002 study found that caffeinated gum quickly absorbs in the body and can take effect in as little as 5 to 10 minutes. So if you don’t want to take any of the risks shared above, then chewing caffeinated gum and spitting it out shortly before you start running will still allow you to reap the caffeine benefits and minimize your risk.)

That’s ultimately up to you. If you find that chewing gum while you run helps provide mental stimulation or leads to a lower rate of perceived exertion, just know that you’ll have to decide for yourself if the risk outweighs the benefit.

Does Chewing Gum Work Better for Certain Kinds of Runs or Runners?

Chewing caffeinated gum has been shown to improve short- to moderate-distance running performance. However, when tested for its effects on repeated sprints, caffeine gum did NOT make much difference at the highest sprint velocities.

Based on that research – and on the inherent risk of inhaling the gum when breathing hard during a speed workout – it is probably best to only chew gum during your easy runs, (if you do decide to chew during your run).

If you’re a female runner, you might need to take in higher quantities of caffeine gum to reap the energizing benefits for your running performance. A 2021 research study examined the effects of caffeine chewing gum on exercise intensity, only using female athletes as its subjects – most prior studies have been conducted with male subjects. The results showed that regardless of how much caffeine they consumed in daily life, female athletes may need higher doses of caffeine than males, in order to reap the same benefits for athletic performance.

What is the best gum for runners?

When choosing a gum to supplement your running that provides the most benefit, make sure that the gum you buy contains caffeine. As mentioned above, without caffeine in the gum, your running performance likely won’t see improvement.

Most caffeine gum products we’ve found contain additional ingredients intended to boost the effects of the caffeine, such as taurine, B vitamins, L-theanine, or ginseng. The jury is still out on the true benefits of some ingredients, like taurine. However, other ingredients, such as L-theanine, have been scientifically proven to boost performance when combined with caffeine.

Here are three types of caffeine chewing gum to try:

If it’s the simple act of chewing gum during a run that you think we’ll help with the mental aspect or you just want a distraction, really any gum will do.

If chewing gum for running isn’t your thing, then there are plenty of other caffeinated supplements geared toward runners and other athletes! Most of these gels, chews and liquid hydration mixes contain between 25-100 mg of caffeine per serving – similar amounts of caffeine as caffeine gum.

Here are some options to check out:

*As an Amazon Associate, I make a small commission on qualifying purchases. Most product links in this post are affiliate links. I appreciate your support!

link to Get to Know the Tempo Run: How Fast and How Long Should They Be?

There are several key components to any runner's weekly training plan: a long run, easy runs, and quality runs. One kind of quality run that you may encounter is called a tempo run. But what is a...