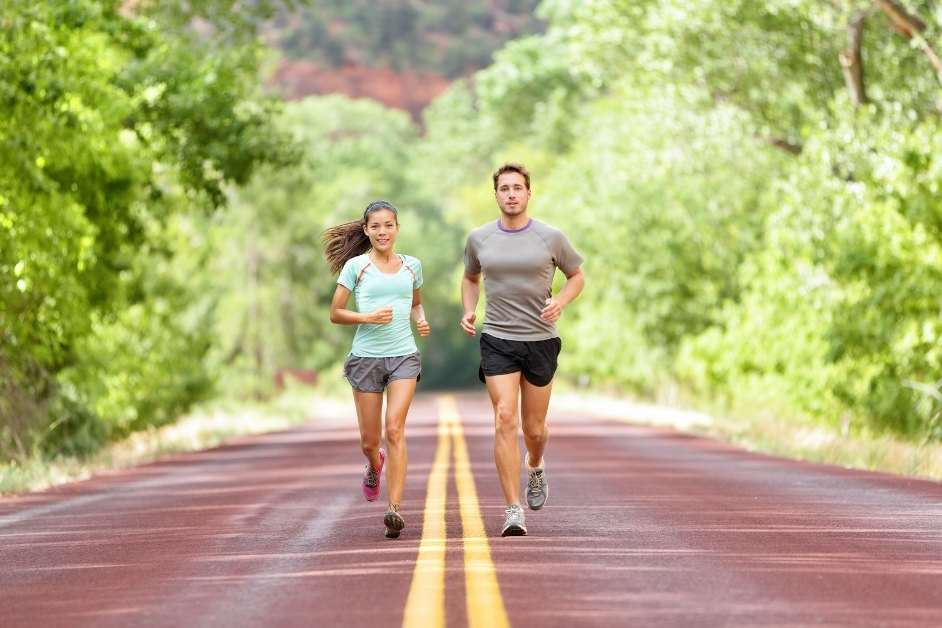 80/20 running is a popular concept in the running world nowadays. But what exactly is it?

80/20 running is a principle of polarized training, where a runner spends 80% of their training runs at an easy effort pace, and 20% at a hard effort pace. Training in this manner typically allows runners to reach their best potential on race day while avoiding injury, burnout and/or plateauing.

You might be wondering how to implement 80/20 running and how it can benefit you and your training. Read on to learn all about this popular form of training, its origins, and how you can start using this method to improve your running!

Training 80/20 is not so much a rule as a general guideline.

The 80/20 principle is a concept of what is referred to as polarized training – essentially the concept that training is either done at low or high intensity with little done in a mid-range intensity state.

With 80/20 specifically, the premise is that 80% of your training should be completed at an easy effort level, and 20% should be completed at a hard level. If you’ve ever heard of someone training in a manner where they keep their “easy days easy, hard days hard,” then they are probably following the 80/20 principle or similar. This training principle is not just beneficial to runners, but is equally applicable for cyclists, swimmers, triathletes, cross-country skiers, and rowers.

80/20 training was first identified in the early 2000s by an American sports scientist, Dr. Stephen Seiler, who is based out of the University of Agder, Norway. Dr. Seiler did not invent the concept of 80/20 training, but is credited with coining the term after conducting extensive research noting the success of this method that endurance athletes were already using.

As a former competitive rower and cyclist, Seiler observed consistent training patterns in top-performing athletes across multiple sports and found that these athletes were spending the vast majority of their training at very low intensities, and sparingly training at high intensities.

Much of what Seiler studied in athletes can be attributed to the training methods of Arthur Lydiard. Lydiard was a New Zealand running coach who, beginning in the 1950s, emphasized the importance of low intensity, high volume training for middle and long-distance runners to build aerobic capacity. Lydiard believed the key to achieving maximum running fitness was running lots of long, slow miles, with some occasional, focused speed work added in. His methods became popular worldwide after Lydiard’s runners demonstrated success in the 1960 Summer Olympics. Many of his training practices are still used today.

Seiler has studied the 80/20 principle in both elite and recreational endurance athletes (cyclists, runners, rowers, swimmers, etc.) over the years. Through studies (cited here in Runner’s World), he has found that 80/20 ratio is optimal for the human body in endurance sports.

Sports journalist and runner Matt Fitzgerald published his book, 80/20 Running: Run Stronger and Race Faster by Training Slower, in 2014, based on Seiler’s studies. Fitzgerald is responsible for bringing Seiler’s work into mainstream popularity for runners.

An 80/20 running plan is a training plan where a runner completes 80% of their running mileage at a very easy level, or low intensity. The other 20% of their mileage is hard, which range between moderate-to-high intensity. There are only two intensities with 80/20 running: low, or medium-to-high. (Intensity refers to how hard a physical activity is.)

Working out the proper 80/20 split is sometimes easier when training by time, rather than distance. But if you like to train by distance, an easy way to keep track is to run approximately 4 out of 5 of your runs easy. But, remember that easy mileage done in warm-ups, cool-downs and recovery periods can also be counted toward your 80% easy mileage. For example, a 16-mile long run that has 4 miles at marathon pace with the rest easy would be 25% hard intensity and 75% easy intensity.

But you don’t need to worry about the split being perfect, either.

According to Dr. Seiler, 80/20 is not a strict rule. He says it’s okay if an athlete’s training resembles an 85/15 or 75/25 ratio of easy versus hard effort, as long it is fairly close to an 80/20 ratio. The most important thing is to run the bulk of your miles at a very, very easy pace.

Seiler states that most recreational runners get their running intensities all wrong with respect to long-term fitness progress. In fact, one study showed that the majority of recreational runners complete 46% of their runs at moderate intensity, and 46% of their runs at low intensity. Spending too much time in the middle intensity zone can lead to a runner plateuing in their fitness which is why these runs are often referred to as “junk miles.”

What is considered low intensity running?

You can determine low intensity or “easy” running using the following methods:

Faster runners have a larger range of paces to accommodate slowing down. Slower runners, who don’t have as much room to play with their paces before walking, might need to incorporate walking breaks into most of their training runs in order to stay at the proper low intensity parameter. Jeff Galloway’s Run/Walk Method is a great place to start in order to understand how to strategically use walk breaks to your advantage.

What is considered high intensity running?

Many runners are guilty of running too fast for their daily runs, and might be running at a high intensity without even realizing it. However, this practice is problematic, because too much high intensity work places added stress on the body, making recovery difficult.

Runners who frequently train at high intensity often find themselves overtrained or injured, which is why it’s important to keep hard efforts contained to about 20% of your weekly mileage.

Take me, for example, when I first started running: I would try to go faster than my previous run, so that every run felt hard. If I ran at an 11:30 minute/mile average pace yesterday, then I tried to run at an 11:00 minute/mile pace today. It was almost as if I was racing against myself every time I set foot outside! But at the time, I didn’t know any better. It wasn’t long before I was sidelined for several weeks with Achilles’ tendonitis.

Is moderate intensity running ok with 80/20?

In theory, running at moderate intensity is fine as long as you count it toward the 20%. However, if it doesn’t have a specific purpose to help you achieve your goal, it’s less effective.

It’s important to keep in mind the theory of specificity when it comes to determining what pace you’ll be using for the 20% of your running and whether it will be closer to a moderate or hard intensity. If you are training for a 5k for example, it’s best to included short-interval training at 5k pace or faster. But if you are training for a marathon, tempo runs and marathon pace efforts are important to include.

If you find that most of your runs are happening in the moderate intensity range, in order to adhere to 80/20 training, you will need to slow down.

Dr. Stephen Seiler and other sports scientists have studied the 80/20 principle in both elite and recreational runners. They found that polarized training, such as the 80/20 principle, can stimulate greater training effects than between-thresholds training in recreational runners, as this study states. In other words, 80/20 running should yield positive results for almost everyone.

There are a few groups of people who should be running easy more than 80% of the time. Athletes who should not adhere to the 80/20 principle include those who:

These athletes need to prioritize rest and recovery, and should aim to perform high intensity exercise less than 20% of the time. Of course, this won’t be the same for every runner. Runners in these groups can often do best under the guidance of a coach.

Do I need to know my heart rate zones in order to practice 80/20 training?

Knowing your heart rate zones or having a heart rate monitor is useful for 80/20 running. But it isn’t necessary. The majority of your running should just feel really easy – in fact it’s probably slower than you are already going on your easy days. If you have to wonder if you are going to fast, you probably are. You cannot go too slowly on your easy days as long as you are staying in the aerobic zone (usually around 65-75% of your max HR).

Heart rate monitors can take the guesswork out of it, however, which is why some runners choose to use them. If you do, just make sure you have one that is accurate. Your best bet is to get a chest strap HR monitor like the Polar H10. We discuss other options in our post about heart rate training.

If you have a recent race or time trial result, you can visit Fitzgerald’s 80/20 Endurance website, where there is a free zone calculator to find your proper 80/20 paces.

The bottom line of 80/20 running? If you slow way down on your easy days, dedicate a small amount of your training to running hard and stay consistent over time, you will find success with this method.