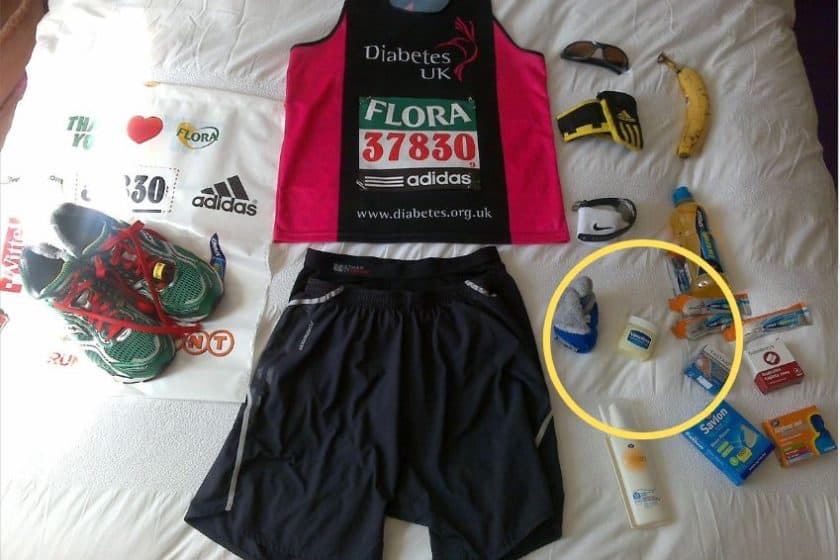 I will always remember how at one of my earliest races, probably the Bolder Boulder 10k, volunteers were walking around with a big wooden board of translucent goo smeared on it. Right as I was wondering what the heck it was, I saw some guy swipe his hand through the goo and start applying it under his arms. “Gross!” I thought…realizing then that it was community Vaseline. At the time, I didn’t really understand the purpose of this apparent race staple. Once I started training for marathons, however, it all became crystal clear.

How can I stop chafing when I run? Chafing can be an issue for runners training for a marathon. Any time a person sweats and skin rubs against clothing or other skin, chafing can occur. With repeat friction, this can cause redness and irritation of the skin and sometimes even bleeding. Vaseline acts as a barrier, preventing chafing from happening while running.

The question is, does Vaseline need to be part of your marathon training gear? Let’s find out.

Vaseline and Its Uses

Vaseline is a brand name of petroleum jelly, much like how many people call all facial tissue “Kleenex.” And just in case you’re wondering if it was invented for us marathon runners, the answer is no. (But read on to find out about a product that was!)

In 1859, Robert Chesebrough patented the process of extracting petroleum jelly from an oil rig pump residue called “rod wax”. He began selling it as a medicinal product and branded it with the Vaseline name in 1870. Its specific use was to heal cuts and burns, which it is still used for today. The brand is going strong and is used for various purposes on the human body including:

Petroleum Jelly is recommended by the American Academy of Dermatology and is considered very safe for external skin use. It’s definitely something that marathon runners can benefit from having in their medicine cabinet.

Why Marathon Runners Use Vaseline

With its variety of uses, it’s not at all surprising that Vaseline has continued to be a popular medicinal product for over 150 years. Though runners tend to get excited about all of their fancy equipment…Garmin watches, wireless headphones, hydration packs…just to name a few, sometimes it’s the littlest things that can make or break a run. Vaseline is one of those things.

I know it doesn’t look or sound exciting, but most marathon runners are so thankful once they’ve added Vaseline (or similar) to their list of necessary gear. The cost is so little but can really make a big difference. Here’s why.

Runners sweat. A lot. And if you live in a place like Texas or Florida, you know all too well what it feels like to be drenched in sweat post-run. Even in Denver where I’m from, if my long run goes a little too late in the day in July or August, there is so much sweat.

When sweat mixes with parts of your skin that touch other parts of your skin, or sweaty skin that rubs against your clothes, your skin slowly starts to chafe away. You probably won’t feel it at first, but once you do, it’s not going away. The combination will leave you with a burning sensation as the skin breaks that only gets worse as the run continues. And when you finally arrive home ready to begin your recovery with a hot shower? Be ready for the awful sting you’ll feel as the water moves over your new sores. No one will blame you for the obscenity that’s sure to leave your mouth when this happens.

Every time I’ve ever forgotten to put on Vaseline before my run, I am always sorry. From time to time I forget a spot. That’s always unfortunate. Or a particular shirt rubs differently then I expect. Then I get a whole new chafing mark in a spot where I’ve never gotten one before. Though I could just lather my entire body in the stuff, I’d prefer to skip the shiny look. So, I generally stick to some key spots and hope for the best.

Where to Apply Vaseline to Stop Chafing

If you’re thinking, hmmm, I’ve run quite a bit and I’ve never really had this problem before. It’s possible you’re one of the lucky ones. Maybe your clothing fits just right, don’t have any rubbing together of skin, or you’re not that sweaty of a person. All possible. But it’s also possible that you’ve just never run far enough in conditions that might warrant Vaseline. I would say for me, personally, I can easily get away with a 6-mile run with no chafing, and longer than that if it’s a cooler morning.

If you’re new to marathon running, you might find that though you’ve never had an issue with chafing before, suddenly your long runs are leaving you left with spots that resemble rug burns. Higher mileage equals more sweat and more time for chafing to occur.

These are the top places on your body you’ll want to apply Vaseline:

Are there other spots? Definitely, yes. Every runner is going to be different. We all run differently and all wear different running attire.

I have gotten chafing on the side of my neck from not properly attaching my water tube on my hydration system. Didn’t see that one coming, but knew within the first couple of miles that it was going to be a problem. I also have a certain couple pairs of shorts where the top of them rub against my back in just the wrong way, and in fact, I’m currently sporting a couple of small wounds from this happening when I wore them on a run that I skipped the Vaseline thinking it was a short enough run. Nope, I was wrong. Then you wear your swimsuit to the pool afterward and everyone says, “Oh my gosh! What happened to you?!” Super fun.

The bottom line is that it’s probably only going to take you one long run in the heat to know whether or not you need Vaseline and where on your body you’re gonna need it. I would suggest taking a travel-sized tub with you on your run and applying it as soon as you feel something coming on.

From thereafter, always apply liberally to the places you need it and then bring the tube along with you in case a new spot pops up. In fact, I probably should take this advice myself.

Are there other products or solutions to these chafing issues?

As I said before, Vaseline is just a brand name of petroleum jelly. Any old store-brand petroleum jelly will do the trick. There are a couple of other products you can try that work in a similar way.

This is actually the product I’ve used the most because it’s what I’ve had on hand. Being a mom of 3, we used to have a ton of Aquaphor lying around and always seemed to have samples of it that I would strategically place around the house. It feels similar to Vaseline. Its purpose is to, “protect the skin from wetness, acidity, and painful chafing.” It works, people.

Body Glide is a product specifically made for runners and other active people. It works much in the same way as Vaseline, though they claim it lasts longer with less re-application needed. It’s shaped like a deodorant stick, so some might find it a nice alternative to Vaseline since you don’t actually have to touch it with your fingers. I have used it before and it does the trick. 75% of reviewers on Amazon give it a 5-star rating as well.

Any of these products should work great for you in your anti-chafing needs. Half the battle is just remembering to put it on in all of the right spots.

One downside to using each of these products is that they can stain your clothing. I’ve never had this problem, but it does discolor my clothes sometimes when I initially put it on. A very small price to pay to prevent any suffering.

Other Ways to Stop Chafing

But the next question is then, are there any other solutions for marathon runners? Now it comes down to your gear and attire. If you’re wanting to skip the step of applying anything to your skin, you’re going to have to look closely at what you’re wearing. Here’s what I’d recommend:

One last thing. Before you head out the door for your long run, check the other gear you’re wearing to ensure that it fits properly and won’t be rubbing in any of the wrong places. I would also recommend finding the outfit that works best for you on your long runs and stick with it each week.

Even with the clothing recommendations, I, for one will still be choosing Vaseline or the like for all my anti-chafing needs.

And as you slather on the Vaseline in preparation for your long run it’s perfectly normal to start to realize that you are now among a very special (crazy?!) breed of people. It will be solidified as you swipe your hand through the community Vaseline board at your marathon and say, “I’ll take some of that.”

*As an Amazon Associate I earn from qualifying purchases.