In my mid-20s, I ran my first two marathons. Even though as a Coloradoan I was training at altitude, I purposely chose marathons at sea level. My first was in Long Beach and my second was in Portland. I also had family connections to Portland but the fact that it was at sea level made it a lot easier for me to say yes. Marathons are daunting, am I right?! I’m up for a lot more challenges these days, but back then I felt like I could take any help I could get. Everyone always talks about how running at sea level is easier. Is it as simple as signing up for a sea level marathon so we can all run a little faster? I know we all love a good PR, so let’s find out.

Do people run marathons faster at sea level? Running at sea level makes it easier to breathe than at altitude. If this was the only factor, then running a marathon at sea level would be faster. However, the weather and elevation changes are other factors to consider so you can’t just assume you will run faster in a sea level marathon.

Not only is it important to know if we’ll run faster at sea level, but ultimately you’ll want to know if you should sign up for a sea level marathon. They aren’t all created equal. With so many options for marathons, knowing if it’s worth the trip to sea level is important. I’m here to help you make an informed decision.

It’s not going to surprise you most likely that obtaining oxygen at sea level is easier than at higher altitudes. If you live at sea level, however, you won’t really notice. It’s the same as how I don’t notice a lack of oxygen living a mile high above sea level – I’m just used to it. I honestly don’t even really notice easier breathing when I head to sea level – I mean, is running really ever easy?!

But, the facts don’t lie. Higher air pressure at sea level allows us to breathe easier. This is because oxygen molecules are closer together than at altitude due to them being pushed together. This means for every breath you take, you are breathing in more oxygen molecules at sea level than at higher elevations. Oxygen is delivered to the cells throughout our bodies much more readily as we breathe it in. There is literally more oxygen to breathe at sea level.

In using this calculator from altitude.org, it demonstrates that there is 100% oxygen at sea level. This decreases significantly for every 2000 feet you go above sea level. See the table below to see the percent of oxygen at different altitudes.

Now we just have to determine if breathing easier with more oxygen present is going to make us run faster. It sure would make sense to me, but is it significant? I guess it depends on where you’re comparing it to.

There are plenty of articles that discuss the difficulties runners can face at high altitudes. In fact, many elite runners purposely train at high altitudes to acclimate as well as make it easier on themselves when heading to lower elevations to race. Instead, we’re going to take a look into how much faster we can really be when we’re at sea level with more oxygen available.

It is true that the supply of oxygen has a significant effect on endurance performance such as in a marathon. Runners are always looking for ways to increase their VO2 max, or the highest rate at which oxygen is consumed at all out exercise. Ultimately, if you can increase your VO2 max, you will be faster. Going up in elevation negates this, but it isn’t significant until you head farther up. In fact, there is not a strong correlation between the effects of altitude on marathon running performance until getting above 2,000 feet.

According to our chart above, the average elevation for the U.S is 2,500 feet. Since we’re comparing the difference between a low-mid level marathon versus a sea level one, I chose a popular marathon that supports the Red Cross in the Run for Red Poconos. It’s 1,874 feet above sea level. At that altitude, we would have 94% of the max oxygen available. At just 6% less oxygen than if we were running at sea level, does this really matter?

This calculator from Runworks allows you to input a predicted finish time for sea level and then it will tell you what time you can expect at other elevations. For a predicted time of 4 hours at sea level, it predicts a time of 4:05 at an elevation of 2,000 feet. With a difference of 5 minutes, it does demonstrate that low levels of altitude can affect race speed. But I think we can agree that is pretty insignificant when we’re talking about a marathon. And probably something you can compensate for with a little extra training.

When I was in Oregon last fall training for my marathon, I never really noticed that my paces were faster than what I was used to in Colorado. I wasn’t racing, so it was hard to tell what kind of difference the altitude was making. If I were to go off to race a marathon at sea level, I would probably be paying more attention. Data will probably give us a better idea of what to expect than by just going by feel anyway.

We can break high altitude into 2 categories – major cities and mountain areas. 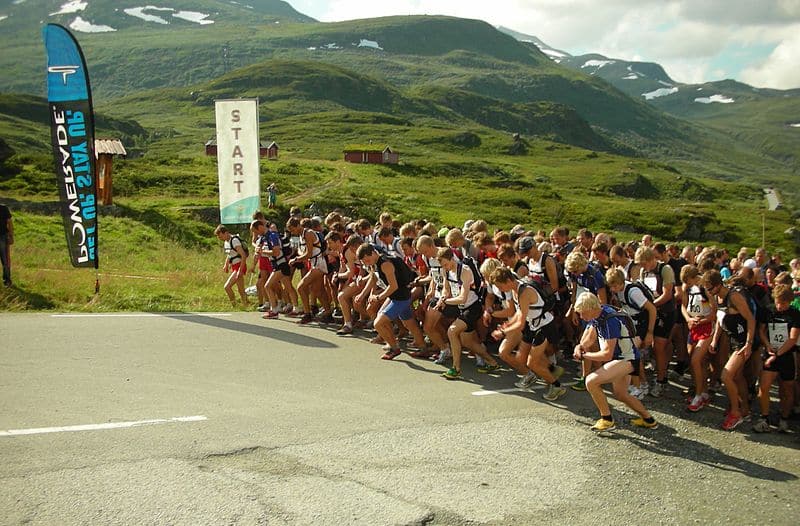 For this category, we’re looking at you Denver. A beautiful and popular city at 5,280 feet – and one that I happen to live in – it fits perfectly for this category. The Colfax Marathon is a popular race that stays pretty steady at this altitude. So, what kind of speed deficit will you see in your running if you head here from sea level?

We’ll use the same calculator to compare. For a predicted time of 4 hours at sea level, it predicts a time of 4:13 at an elevation of 5,000 feet. That’s getting a bit more significant than what we saw 3,000 feet lower. So, yes, you can plan to be a little slower if you head to Denver for a marathon. Also keep in mind that Runworks states this: “Predicted finish times assume the runner is already acclimatized to the altitude.” This means that you’d have to give yourself time before your race to become accustomed to the higher elevation – which can take 2 weeks or more. That sea-level marathon might be looking pretty good right about now, eh?

High-Altitude Marathon Running in the Mountains

By now you might already be ready to move on to our section about a few fast sea-level marathons after that Denver business, but just in case you’re not convinced…

The Madison Marathon in Montana has a starting elevation of 9,250 feet and is one of the highest road marathons. It’s no 14er (phew) but it is up there for sure. For a predicted time of 4 hours at sea level, it predicts a time of 4:23 at an elevation of 9,000 feet. If your top goal isn’t speed, this looks like a beautiful marathon. On the other hand, those extra 23 minutes might not be what you signed up for.

Another upside of a sea level marathon is a lower risk of dehydration.

Factors that Can Slow You Down Even at Sea Level

The case has been made that people do run marathons faster at sea level. It’s important to remember, however, that this only takes into account the altitude (and percent of oxygen available). Having access to 100% oxygen is what allows us to go faster. But this isn’t the only thing to consider when choosing a fast marathon.

What can slow you down?

On the other hand, all of these factors are a possibility at higher altitudes as well. If you’re looking for the fastest sea-level marathon, you’re going to want it to be cool, calm, downhill and with low humidity. Now, where might that be?

The verdict is in – yes, you are likely to run faster in a sea-level marathon than at higher altitude with all other factors the same. You’ll have to decide how much a few minutes (or several) off your time matters to you. If you’re looking for a few great sea-level marathons, here you go. And if you’ve run one of these, I’d love to hear about it!

Looking for other fast marathons? Check out 10 Downhill Marathons Across the U.S. to Get That PR