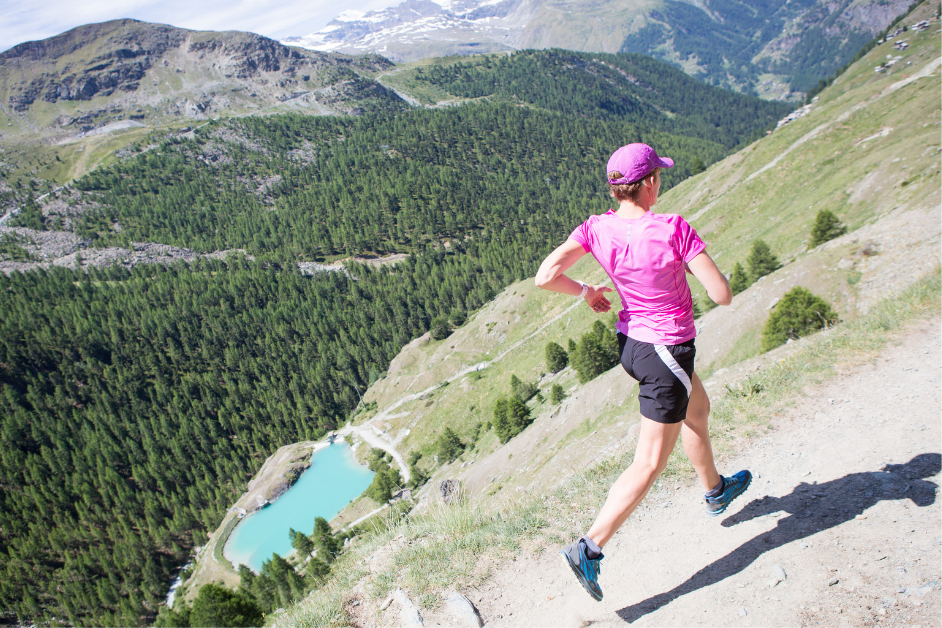 If you’ve ever gone on vacation to a location at a significantly higher elevation than where you live, it’s likely you noticed the effects of the altitude on your body – especially if you decided to go for a run. I believe they call the term “sucking wind.” Why does running at altitude feel so terrible?

The higher you go up in altitude, the less oxygen there is in the air for you to breathe. Because your muscles require more oxygen while running, the decreased amount of oxygen in your blood that occurs at altitude will require your body to work harder which will make running more difficult. You may feel these effects as low as 5,000 feet above sea level.

The good thing is your body will adjust over time and running WILL feel normal again. But it’s best to ease in without overdoing it. Read on to find out what to expect if you run at altitude and how to acclimate the right way.

What is considered high altitude running?

For instance, Denver, Colorado (where I live), sits at an elevation of 5,280 feet.  Many visitors who arrive in Denver from lower elevation and coastal communities quickly notice the change in the air and find running to be more difficult. A pace that was typically easy back home suddenly doesn’t feel very easy anymore!

Why is it more difficult to run at high altitude?

In order to understand why high altitudes initially make running (and other intensive activities) more difficult, it is important to delve into the science of the changes to the air at high altitudes, and to also understand what happens to the body when it reaches a higher elevation from which it is acclimated.

The air we breathe is comprised of two main gases: nitrogen, which typically makes up 79% of the air, and oxygen, which is typically 20.9% of the air.  At high altitudes, the air pressure is decreased (sometimes we call this “thin air”), which causes the heavier oxygen molecules to likewise decrease in concentration.  The oxygen molecules spread out, so that every breath of air one takes at high altitudes contains less oxygen.

Less oxygen in the lungs translates to less oxygen delivered to muscles, and voilà – your body is now experiencing altitude-induced hypoxia.

[hypoxia: low oxygen in your tissues]

In response to the shock of a decrease in oxygen, the body starts to produce more red blood cells in an attempt to move more oxygen through it.  The volume of blood plasma in the body increases to keep the blood from getting too thick.  The heart and respiration systems also increase their workload in response.  All these processes result in a body that is working much harder than normal to function, at least until it adjusts to the new altitude.  The good news is that within a few days, your body will begin to adjust and activities like running won’t feel quite as hard as they did when you initially arrived at the higher elevation.

Side Effects of Running at High Altitude

I will never forget the first time my parents and I flew to Laramie, Wyoming (elevation 7,220 ft.) from San Diego, California (elevation 62 ft.) to rent my graduate school apartment at the University of Wyoming.  We were getting ready for dinner when my mom announced that she was suddenly feeling sick.  She had a headache, nausea, and a loss of appetite.  Looking back, it’s obvious that she was experiencing some classic signs of altitude sickness!

Even if you’re one of the lucky ones who doesn’t experience altitude sickness per se, you’ll probably still notice some side effects during or after your run.

The side effects of running – and even simply being – at a new higher altitude most closely resemble the effects of an alcohol hangover.  Typically, side effects will set in within 2-12 hours after arriving at high altitude.

These possible side effects can include:

The human body can and does adapt very well over a relatively short amount of time to mild altitude-induced hypoxia, so any side effects you may experience will be only temporary.  Symptoms typically subside over the course of 3-5 days as the body adapts to the changes in the air.

It is common for runners to seek out races at elevations lower than where they live so they don’t have to worry about the side effects noted above. Additionally, running at sea level when you are accustomed to running at 4,000 feet above sea level or more will likely feel easier…and you may just serve up some faster race times. You can read more about the benefits of running at sea level here.

But there are also many beautiful and popular races held at higher elevations, and you shouldn’t count these out. You can probably expect to go slower than your typical predicted finish times, but fast times aren’t everything. You’ll have lots of opportunities. Curious to know what your race times might look like at different elevations? Check out this calculator for that from RunWorks to get an idea.

Pro Tip: If you have a race at altitude, plan to arrive at least a week in advance to allow your body to adjust beforehand. If this isn’t possible, the second best option is to arrive only one day before so you can hopefully race prior to the side effects fully setting in.

Benefits of Running at High Altitude

You have probably heard of professional runners training at high altitudes while they prepare for upcoming races.  It is a common practice for many American pro runners, who train in places like Lake Tahoe, Flagstaff, Utah and Colorado.

But if being at high altitude causes all sorts of disruptions in the body, why bother at all?

It turns out there can be benefits to training at higher altitudes.  The idea of training at high altitudes developed after the 1968 summer Olympic Games, which were held in Mexico City (elevation 7,382 ft).  At those Games, distance athletes were observed to have significantly slower race times than were expected.  The culprit: high altitude, and bodies having to work much, much harder than they were accustomed.  Following the 1968 Games, the idea was born that the physiological adaptations resulting from high altitude training might cause athletes to perform better once they returned to perform at low altitudes.

How does this work?  Sports medicine research has shown that runners who acclimate to higher elevations have increased lung capacity.  These runners also have increased oxygen capacity due to the increase of red blood cells in their bodies from being at high elevations.  Research has shown that elite runners who return from the mountains to race at sea level can temporarily boost their performances by 1-2%.  While it doesn’t sound like much, seconds do matter in the elite running world.  Professional runners want to reap whatever advantages they can and increase their chances of winning.

But what about the rest of us recreational runners?  Is high altitude training something we should be doing in order to snag that PR most of us are chasing?  Not really.  According to researchers at the University of Texas Southwestern Medical Center, “If you aren’t an elite athlete (a professional or an Olympian), you likely will not benefit substantially from altitude training, at least compared to the benefits that can obtained by optimizing all the other key components of a training plan.”

How to Acclimate to Running at Altitude

You may find yourself wanting to go for a run during your vacation to the mountains, or perhaps you’ve recently moved to a city at a much higher elevation than you’re used to.  While there is no way of avoiding the physiological changes inside your body once you’ve arrived at a higher altitude, there are things you can do to help your body acclimate more smoothly.  Follow these recommendations, and soon running at high altitudes will be just as enjoyable as running at the lower elevations your body is used to: