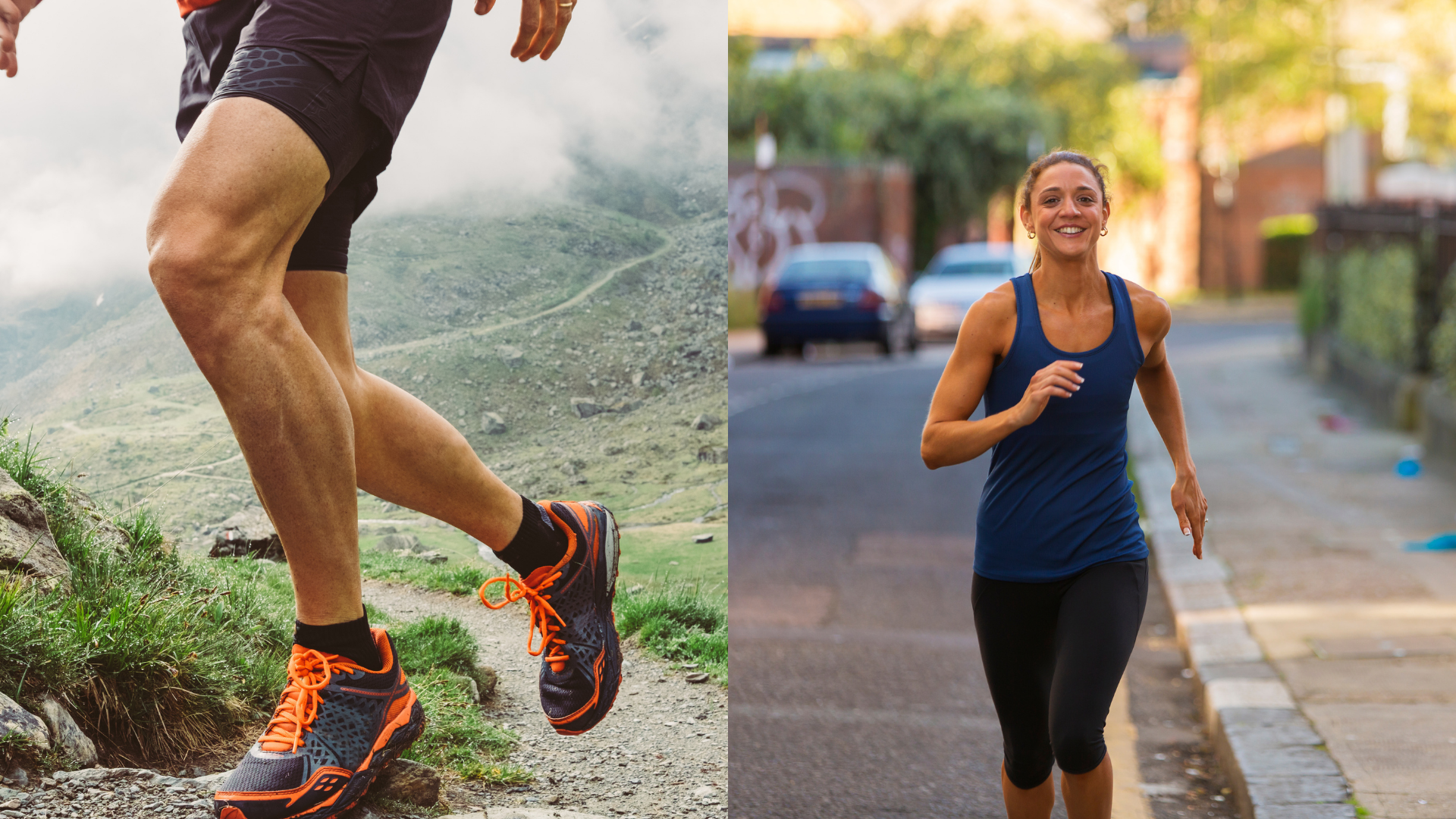 Are you new to trail running and wondering how it differs from road running? As someone who ran only roads for a very long time before adding in some trails, it’s normal to wonder what to expect.

The main difference between trail running and road running is the terrain. Road running typically refers to any running that’s done on a flat hard surface such as asphalt or cement whereas trail running is done on natural ground surfaces – most often dirt. Whereas road running surfaces are typically uniform, there is a lot more variation with trail running. Some trails are flat and easy to navigate whereas others have very technical terrain that can be more of a challenge.

Though very different than road running, trail running is something that many runners enjoy adding into their routine. Read on to learn all about the unique benefits that come along with running some trails!

What’s the difference between trail running and road running?

There are several notable differences between running on trails versus running on roads. A natural ground surface is the most prominent of these differences, as trails can be comprised of packed or loose dirt, grass, gravel, wood chips, rocks, sand, and everything in between. Some trails even have more than one type of running surface on the same trail.

Here are some of the other differences that make trail running unique from its paved counterpart:

When considering if trail running is harder than road running, it’s important to remember that not all trails are created equally, and neither are runners.

Trails can be harder, in the sense that they inherently encompass more obstacles, rougher terrain and hillier routes than typical road routes. Natural trail surfaces mean extra work for your feet and legs – similar to how running along a sandy beach requires a bit more effort.  Your body will be using a lot of tiny muscles, which aren’t typically utilized for smooth road running, to keep you balanced and stabilized on the trails. Additionally, you’ll be working to make quick adjustments in your footing, especially if there are uneven spots along the trail, or obstacles for you to avoid.   If you’re making a transition to trail running, the bottom line is that adjusting away from road running will take patience.

If the thought of running up a bunch of hilly trails sounds intimidating and exhausting, one positive and not-as-well-publicized aspect to trail running is that power walking up hills is almost universally embraced.  Uphill power walking is one way that trail runners keep their legs fresh and energy levels from getting too depleted on the run.  At the trail 10k race I completed, all the racers power walked up a very long, steep hill during the middle of the race.  It was incredible to see, because that would almost never happen during a road race!

Can trail running improve my road running and will it make me faster?

As mentioned above, trail running helps develop and strengthen the tiny stabilizing muscles in your body, specifically in the core, hips and ankles.  Stronger stabilizers help reduce the risk of repetitive/overuse injuries that so commonly occur in road runners.

That’s just one way that trail running can make you a stronger and faster road runner.

Here are two other ways trail running will help your running overall:

If trail running sounds like something you’d like to incorporate to aid your road running, a runner can reap the all the added benefits of trail running by hitting the trails just once a week!  Try running on trails for your recovery or long runs.  If you’re training for a short race, such as a 5k, you can afford to spend more time on the trails than someone who is training for a longer race, such as a marathon.  (Training for longer-distance races requires more race-specific road training.)

Is trail running easier on the body than road running?

Trail running can be easier on the body, because the natural, sometimes softer ground surfaces mean that your joints (including your knees) will not be subjected to as much pounding as they would from road running.  Your body will be better protected from overuse injuries because the changing terrain and varying directional forces you will use to keep yourself stable prevents overloading any one area of your body.

Successful trail running often requires an adjustment to one’s gait, such as increasing cadence and shortening the stride, which reduces time with your feet on the ground.  These adjustments lower the risk of falling on downhills, and also lower the risk of overuse injury.

Power walking uphill is a more efficient means of using the legs, especially when you’re dealing with steep or uneven terrain, altitude changes, and possibly heat.  Powerwalking gives your legs a break by using the muscles differently, and gives your entire body a brief moment to recharge before running again.

Even though your body won’t be subjected to the same forces as it is on the road, trail running does cause more leg muscle breakdown compared to road running.  The reason is because your leg muscles are contracting eccentrically for longer periods of time on the trails.  Make sure you are taking proper steps to fully recover after running on the trails.

Does trail running burn more calories than road running and can it help with weight loss?

Trail running can definitely burn more calories than regular road running.  A 2015 study out of the University of Michigan found that running over uneven terrain increases energy expenditure.  The study concluded that a surface height variability of even 1 inch can increase calorie burn in runners by 5%, compared to running over a smooth surface.

The higher energy demands placed on the body while trail running is another way in which trail running is superior to road running for weight loss and calorie burn.  Whether you’re scrambling up and down hills, dodging trail obstructions such as roots and rocks, and working hard to traverse soft surfaces such as mud, your body is expending more energy than it would on the road.

Another way in which trail running burns more calories and can help with weight loss is because it is an excellent means for high-intensity interval training (HIIT).  HIIT has proven through multiple studies to be an excellent method for weight loss, by alternating short bursts of high intensity work, which raises the heart rate, with low intensity intervals.  Sudden stops, changes in direction, and breaks for walking uphill all add up to make trail running an ideal means for achieving HIIT.

But it’s also important to remember that road running burns lots of calories, too…especially so if it’s a hilly area. We suggest choosing the terrain you most prefer and the rest will come!

And if you do choose trail, you’ll want to make sure you have the right shoes for the elements.

As stated previously, it’s extremely important to wear trail shoes when running on most types of natural surface trail. This is especially important for hilly trails with any technical components such as roots, rocks and bumps. Trail shoes provide the stability and traction that road running shoes can’t.

Here are some specific characteristics of trail shoes that you won’t see on road shoes:

Some even come in an all-weather waterproof design that also make them perfect to utilize during rainy trail runs or to double as the shoes you wear when it’s icy and snowy.

Related: Best Shoes for Running on Ice and Snow

Just as road running shoes are not all created equal, neither are trail shoes. It’s best to go into a store that sells a wide variety so that you can try them on and find a pair that feels the best. If you do choose to order online, it can be helpful to order from a store that has a great return policy which we discuss here.

Can you wear trail running shoes on the road?

Though trail running shoes aren’t typically the top choice for a road run, it’s fine to wear them on the road once in awhile. In fact, you may have a run that’s partially run on a natural surface and partially on road, and in that case it would most likely be better to choose trail running shoes over road running shoes in order to be as safe as possible on the trail. And if there is any ice or snow on the road, choosing trail shoes over your typical road shoes is better anyway.

Just know that because they are typically heavier, trail running shoes may slow you down a bit on the roads. Also, keep in mind that the road will likely wear down the lugs on your trail shoes faster than if you wore them strictly on the trail so it’s best not to make a habit of wearing them on pavement or cement if you don’t have to.