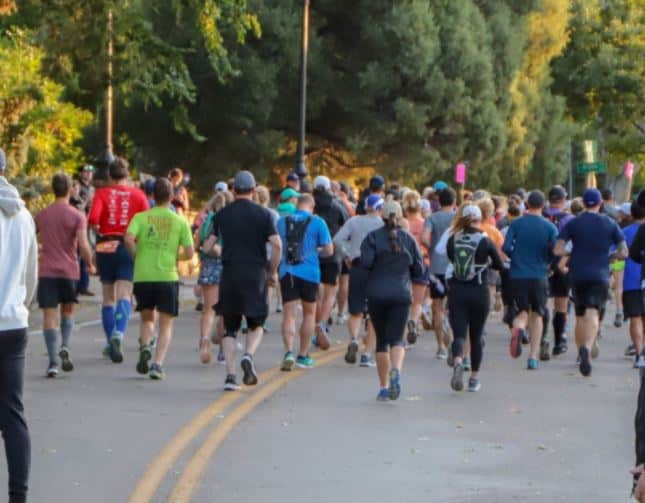 If you’re toying with the idea of running a marathon, you’re likely already a pretty avid runner. I’m guessing you’ve raced 5ks and 10ks and perhaps some half marathons as well. At this point, it’s natural to be asking yourself, “Should I run a marathon?”

Though I can’t make the decision for you, I’ll happily give you some reasons to help guide your choice.

You should run a marathon if:

Bolding the words you and your in those points wasn’t an accident. Making the decision to run a marathon is a big one, and the only way it’s going to end well is if you’re invested and you’re doing this for yourself. Find out now if it’s time to say “yes!” to running a marathon.

How Bad Do You Want It?

You’re not actually putting this huge decision in the hands of me, but instead, are probably seeking out that one thing that affirms what you probably already know. That you want this. Otherwise, why would you ask? (It’s like the time I went on Google over and over asking if I should have 3 kids…but that’s a story for another day!)

I mean, I don’t know, maybe you are looking for someone to tell you that you shouldn’t run one, but I’d prefer to focus on why you should. But if you find that those reasons don’t resonate with you, that’s totally ok, too! Running a marathon is an amazing experience and can change your life, but it’s only going to go well if it’s something that YOU want.

Since you’re on the fence, I hope the following reasons will help you walk away knowing that running a marathon is something you can do. Whether it’s in a few months or even years from now.

You Should Run a Marathon If…

As someone who has run 6 marathons, going from a nearly 5-hour marathoner to qualifying for Boston with a 3:36, I can tell you every single one was worth it. There are articles out there that state reasons to run a marathon that are relatable and fun, but they’re mostly the same benefits from running in general (they mention better sleep, stress reduction, community, new running clothes, etc.)

I’m just not sure those types of things make it worth all the effort, ya know?

Instead, if my friend were to come up to me and ask if they should run a marathon, those aren’t the types of things I would say. Knowing that training is a huge commitment with a grueling culminating event I’d want to be sure this was something that mattered to them so much so that they were ready to commit.

Instead, these are the questions that will help you determine if it’s time for you to start thinking about running a marathon.

5 Questions to Find Out if You Should Run a Marathon

1.) Is running a marathon one of your big, hairy, audacious goals?

We all set goals for ourselves that we’re scared to tell people about because what if we don’t accomplish them? Even though no one else would probably care but you, success definitely feels better than failure (though some failure is actually a good thing.)

Running a marathon definitely falls into this category. It’s a really big goal! According to Runner’s World only .5% of the U.S. population has run a marathon. And I’m not gonna lie, it feels great to be a part of that tiny slice.

Even if you aren’t 100% confident yet in how you’ll accomplish this task, if running a marathon is on your list of goals, then it’s time to start planning. Think about when you want to get it done, commit to a race, find a top training plan and then shout from the rooftops that you’re going all the way!

Will you get the “you’re crazy!” remark? Of course…and that’s part of the fun.

But if running a marathon isn’t one of your goals…like someone else is pushing you to run one, or you just feel like you should because it’s the next rung on the race ladder, then that’s not a good enough reason in my book. I’d caution you to wait to run a marathon until you find the urge is coming from within.

2.) When people talk about having run a marathon, are you intrigued and inspired?

It’s so easy to get caught up in, “I wish I could do that,” when you see someone do something amazing that inspires you. Now of course we’d love to say we have no limits and we can do anything, but let’s be real, I’m not going to be doing a “triple-double” like Simone Biles no matter how much I practice. But SO MUCH of what we see others doing can be done ourselves if we’re willing to put in the work.

And even though your marathon finish won’t match Kipchoge’s or come even close doesn’t mean you can’t let his Breaking 2 documentary inspire you to run your first marathon at your personal potential.

So if you find yourself listening in closely to someone else talk about their marathon race experience and end up asking a laundry list of questions, perhaps it’s time for you to consider running a marathon yourself.

And I’m 99% sure that person you’re talking to would be more than happy to share everything they learned along the way. They’ll be excited to know they’ve inspired someone else to go after a dream.

Just because you may have already checked the other standard race distances off your to-do list doesn’t mean at all that you have to take the leap and run a marathon. Yes, it will seem like the obvious next step, but if you don’t have a desire at all to do one, then don’t.

You can certainly challenge yourself in other ways beyond running a marathon, but man, it sure is a good one. So if you love a good challenge, a marathon will definitely check the box. Because, news flash, it is NOT like running 2 half marathons. A lot more people would do them if it was.

Here are just a few ways a marathon is an incredible challenge to take on:

Long story short, if a new challenge is what your looking for, the marathon won’t disappoint.

You can run a marathon.

It is completely normal to have doubts, and I would guess that almost everyone has this thought before training for their first marathon. In fact, I think most people are afraid they won’t finish it even when they’ve done all of the training demonstrating that they’re ready.

If there isn’t a bit of fear of failure in your goal than it’s not big enough anyway. (And as my husband can attest to, sometimes you really do fail on that first attempt – risk of failure is 100% not a good reason to go after your dreams, though. Read more on that in: The Dreaded Marathon DNF and How to Prevail.)

But if you’re willing to put in the work and do the training that a marathon requires, you can do it. But because the marathon is such a beast, and a volatile distance at that, many first time marathoners choose to focus on just finishing.

But if you do get your time goal? That’s icing on the cake. But focus first on believing in yourself that you can run a marathon, and there will be plenty of other chances to chase those PRs.

5.) Are you prepared to change your life for the better?

I’m not sure anyone would say that no, they don’t want to change their life for the better, but I’m talking about being prepared to make the necessary changes to impact the rest of your life in a meaningful way.

We all know when we’re doing things that aren’t making our lives better or more fulfilled. Not that those things are necessarily bad, but they’re likely not putting you on the path to success in your life or pushing you in the direction of where you want to go. So if you’re looking for a way to make you an all around better person, and to see yourself as someone who can make the seemingly impossible possible, running a marathon is an amazing way to do it.

I think you’ll find that the growth you experience through marathon training and racing will extend far beyond the finish line. I’m not talking about the physical benefits of completing an endurance event, but what it means to set out to do something big and achieve it. It’s a life lesson that fits into many other aspects of your life.

Patience, perseverance, discipline, and self-confidence are just a few of the traits that training for and completing a marathon requires. Realizing you have more in you than you thought is a great way to lead to a better future far beyond running.

Deciding if You Should Run a Marathon

Ultimately, no one can really answer the question of if you should run a marathon, but you. And if the demands a marathon requires sound like too much to handle right now, then that’s ok!

Truly, even though I think everyone has it in them to run a marathon, not everyone should. As much as I would LOVE for everyone to walk away from reading this being inspired and ready to tackle 26.2, if it’s not something you have a desire to do, you’re only going to be frustrated and overwhelmed with the process. In other words, don’t just do it because it’s what someone else thinks you should do or you feel pressure from seeing others’ finish line photos on Instagram.

But I’m guessing something in the back of your mind is pushing you to consider the marathon. And if you answered yes to even one of the questions above, I say go for it! Just remember that doesn’t mean it has to happen in a few months or even this year (and I highly recommend having a half marathon or 2 under your belt first.). A marathon is an excellent long-term goal and they’ll be plenty waiting when you’re ready.