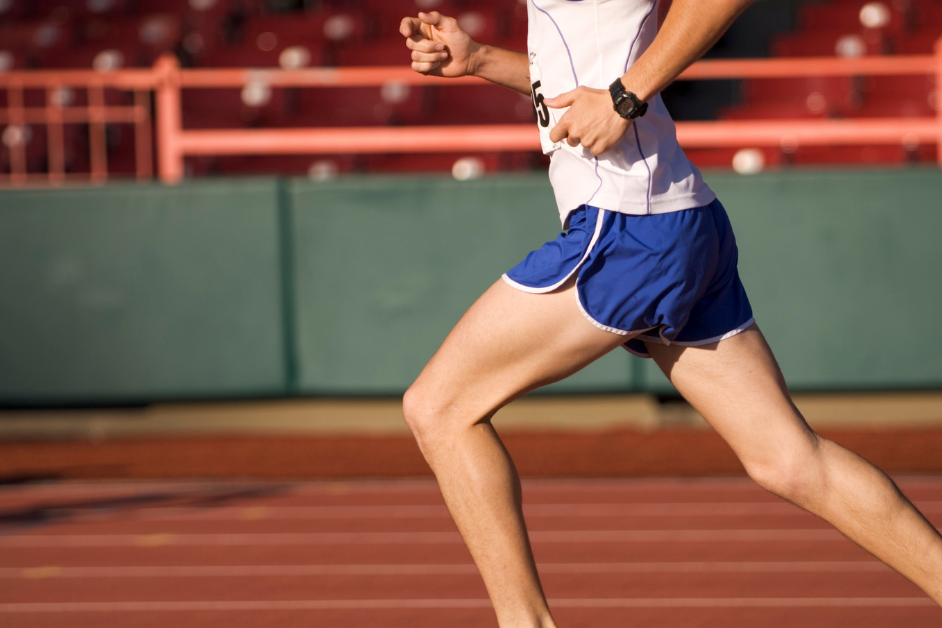 Distance running doesn’t necessarily mean it’s an event run over the course of many miles. Some are short and some are long. Read on to find out more about the different events, how they are categorized and which events might be right for you.

What are the types of distance running?

To begin, it’s important to define distance running.  Distance running simply means running a certain length of a route, usually from one point to another.

Distance running is generally broken up into three categories: short, middle, and long distance. They each have different physiological (like aerobic capacity) and biomechanical (such as stride length and ground contact time) mechanisms which is why they are split the way that they are.

Short distance running is commonly referred to as sprinting.  It is where a runner utilizes bursts of speed to cover a short distance as quickly as possible.  Usually, short distance races occur on a track, and are capped at 400 meters, or one lap around a track.  These races are typically found in high school, college and professional track and field events. Short-distance events go together because they are predominantly anaerobic events done without the presence of oxygen.

The current 100 meter record holder is considered the “fastest human in the world.” As of 2021, this man is Usain Bolt.

It’s important to note that recreational road runners like myself also refer to quick bouts of anaerobic speed work as “sprinting.”

Middle distance events is where aerobic use (meaning with the presence of oxygen) becomes more dominant as demonstrated in this chart (data derived from Runner’s World article).

Finally, we arrive at long distance running.  Long distance events range from 3,000 or 5,000 meter track events all the way up to the road marathon, which is 26.2 miles or 42.195 kilometers long.

Long distance running incorporates more than just road running or simple track events, however.  Steeplechase is a long distance obstacle race where runners jump over barriers and into a shallow water pit, at a 3000 meter distance covered over a track.  Cross-country races, which are typically held in parklands and fields in the countryside, are also considered long distance running.

One could easily make the argument that ultra running – races above and beyond the marathon distance – is a form of long distance running. Seems like it should be, right? Ultimately this falls in a category all its own (more on that below).

How many miles are considered a long distance?

As explained above, running any distance of at least 5000 meters, or 3.1 miles, is considered long distance running, (the 3k is also sometimes considered long-distance). This is the shortest “long distance” because of the nature of the aerobic capacity it requires to perform these events. According to this study from Oxford Academic, “The primary determinants of (long) distance running performance are strongly related to aerobic capacity. In distance events maximum oxygen uptake (⁠VO2max) is an important determinant of performance.

It’s important to remember that distance is not the only way one can measure the length of a run.  Time is another common way that some recreational runners – especially beginners, those returning after time away from the sport, and trail runners – measure their runs.  Many runners who utilize time to measure their runs are deliberately trying to slow down their training paces to prevent going too fast on easy days and risking injury.

The downside to only running by time is that you won’t find many races where distance is not measured.  So it’s important to still make sure you’re adequately training for the race distance you want to complete by gradually building your fitness levels up to be able to complete that distance.

Is a 5k considered long distance?

For those runners who have moved into the world of marathon and ultramarathon running, they would probably tell you that a 5k is definitely not long distance. That’s because for adult runners, this is typically the shortest local race you’ll find (in larger cities you can sometimes shorter races but they aren’t common).

So which is it – short distance or long?

To recreational road runners, the 5k race distance might be considered a short (or middle) distance. It is certainly a longer distance than many track races, or running a mile, for instance, but not nearly as far and daunting as a half- or full marathon. Because 5k is solidly above the 3000m cutoff for middle distance running as defined by athletic governing bodies, as mentioned above, a 5k distance is technically a long distance race. This is due to the aerobic capacity it requires to run the race from start to finish.

What distance is considered endurance running?

The reason is because these terms are highly subjective to each person, and depend upon the context they’re used.  An official sport definition might not match up with an average runner’s definition.  Endurance (or long distance) running might mean something different to someone who primarily runs track, which might be different from someone who primarily runs 5ks, which might still be different from someone who runs marathons!  So, the phrase endurance running isn’t strictly limited to one single distance.

But because we typically associate endurance running with predominantly aerobic running, really any distance of 5k or longer would easily fall into this category.

What about ultramarathon running?

There are over 1500 ultra events held in the United States.  The most common ultra race distances are 50k, 100k (62.13 miles), 50 miles (80.47k), and 100 miles (160.9k).  There are time-based ultra races, where competitors see how many times they can run a short loop in a specific timeframe, such as in 6, 12 or 24 hours.  There are even self-sufficient, multiple-day stage races, where a set distance is prescribed for a runner to travel each day, eventually covering dozens, and even hundreds, of miles.  Currently, the world’s longest ultra race covers 3,100 miles over 52 consecutive days!  Talk about endurance running!

RELATED: How Far Can a Human Run?

How to Choose the Best Distance Running Event for You

In 2019, the 5k was the most popular road race distance, with over 8.9 million registrants, according to a survey cited by Runner’s World.  Because they are typically the shortest race offered in an area, they have the least barrier to entry for someone who may be more of a recreational runner who just wants to jump into a race for run. Turkey Trots are a good example. There are many factors that come into play when deciding what distance running event might be best for you, and it’s impossible to pinpoint just one race distance as the best for someone in a broad, cookie-cutter way.

Here are a few considerations and questions to mull over to help you narrow down what the best distance event could be for you:

As someone who recently completed her first half marathon, after having completed several 5ks and 10ks, I wasn’t entirely sure how I would feel about the half marathon distance until I actually ran it!  You might determine, after weighing all the factors above, that a longer race, such as a marathon, is compatible with your running history, fitness, and goals.  But after you put in the time and work for training, and complete the marathon, you might come to realize that 5ks are your favorite races.  And that’s perfectly okay!  The beauty of running is that if you run, you are a runner, no matter the distance.